Home Sport Sainz: We were faster than Red Bull 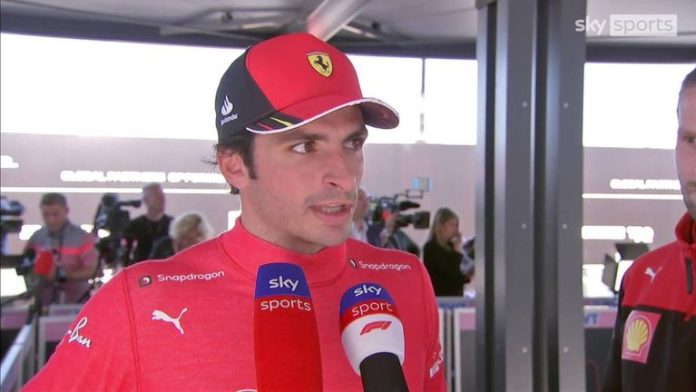 Carlos Sainz and Charles Leclerc were both left to wonder what might have been after the Canadian Grand Prix, finishing second and fifth respectively; next up for F1 is the British Grand Prix with all sessions live on Sky Sports F1 on weekend of July 1-3

Carlos Sainz cut a frustrated figure after Max Verstappen held off the Ferrari driver’s charge to deny him his first Formula 1 win.

The Spaniard had qualified third for the Canadian Grand Prix and was at the sharp end throughout the race in Montreal, even leading at one point and being involved in a fight with Red Bull driver Verstappen for the win during the final 15 laps following a safety car period.

But, try as he might, Sainz was unable to get close enough to the reigning world champion to attempt an overtaking move in the closing stages and felt his second place did not match his overall performance.

“This weekend I was quicker,” Sainz said. “This weekend, for the first time in the championship I was the fastest guy on track both in the medium and on the hard – I was catching Max on both occasions.

“I can tell you I left everything out there, I wanted my first win as much as you guys for even more so you can imagine how much I was pushing it.”

Sainz felt he had the race pace to hold off Verstappen had he been able to maintain the lead without the safety car which was brought out when Mick Schumacher’s car suffered a mechanical failure and saw the Ferrari man dive into the pits.

Emerging behind Verstappen, he was able to stay within DRS range for the closing stages, but even with that could not close the gap enough.

“Overtaking out there wasn’t easy with a tailwind down the main straight there was very little slipstream, very little DRS effect and it was very difficult to mount any overtake on the Red Bull,” Sainz said. “I was close a couple of times and I know I gave my maximum.

“Without the safety car, I could have hung it out there. I think I was quite quick, and Max was catching me but not at a pass that was going to pass me easily at the end of the race.”

Team-mate Charles Leclerc eventually finished fifth, having started at the back of the grid due to a penalty which led to him starting on the hard tyre and going for a one-stop strategy.

Prior to pitting, he found himself stuck behind the Alpine of Esteban Ocon after working his way into the points and when he did eventually come in for his stop on lap 42, the one-time championship leader re-emerged in 12th.

The safety car period allowed Leclerc to close up and slice through the field, but although in the end he was satisfied with the result, the one-time championship leader still cut a frustrated figure post-race.

“The last part was nice but the very first part I was stuck in a DRS train, and I could not do anything,” Leclerc said.

“The end was quite fun; I had to be a bit more aggressive to at least get some points and we finished fifth in the end which is the best considering everything that happened today.

“I felt like Carlos was strong today so this shows that it would have been close.”