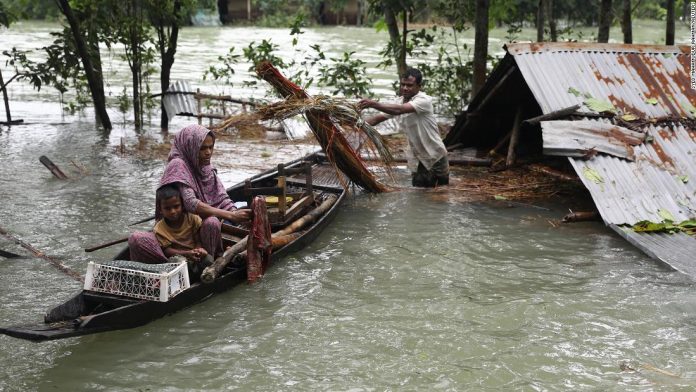 Northeastern India and northern Bangladesh have been particularly badly hit by severe weather, which has prompted some of the worst flooding in the region in years and left some towns cut off.
A lightning strike killed 17 people on Saturday in the northeastern Indian state of Bihar, according to its Chief Minister, Nitish Kumar.
In the state of Meghalaya, which borders Bangladesh to the south, at least 24 people have died since June 9 and three are missing, according to R. Lyngdoh, a senior official in Meghalaya’s State Disaster Management Authority.
More than 633,000 people have been affected by the floods, and the state’s Disaster Management Authority will conduct airdrops of essential commodities for certain districts that are cut off by road, Lyngdoh added.
In the neighboring state of Assam, at least nine people died and eight people were missing as of Sunday evening, according to the state disaster management authority, which is operating 1,147 relief camps housing 186,424 displaced people.
In Bangladesh, flooding has submerged roads and highways and isolated entire districts from the rest of the country.
Enamur Rahman, the country’s State Minister for the Ministry of Disaster Management, told CNN on Sunday that at least two people had died due to the flooding. News agency reports suggest the toll is much higher, however, with Reuters reporting 25 deaths over the weekend, citing local officials.
A lack of telecommunication services has made it difficult to fully assess the extent of the damage, particularly in the hard-hit districts of Sylhet and Sunamganj, Rahman said.
Around 90% of Sunamganj was underwater and almost entirely isolated from the rest of Bangladesh on Sunday, he added.
The news agency Bangladesh Sangbad Sangstha (BSS) reported on Saturday that nearly six million people had been displaced due to the floods.
Officials said millions were being provided with food and shelter in temporary relief camps.
“We were having trouble establishing communication with some districts, but we are now in touch with everyone. Our main issue right now is a lack of drinking water and food, but we are arranging for (some) and trying to transport it using helicopters,” said Muhammad Mosharrof Hossain, a senior official in Bangladesh’s Sylhet division, one of the worst affected areas.
Around 300,000 people are currently in shelters as of Monday, Hossain added.