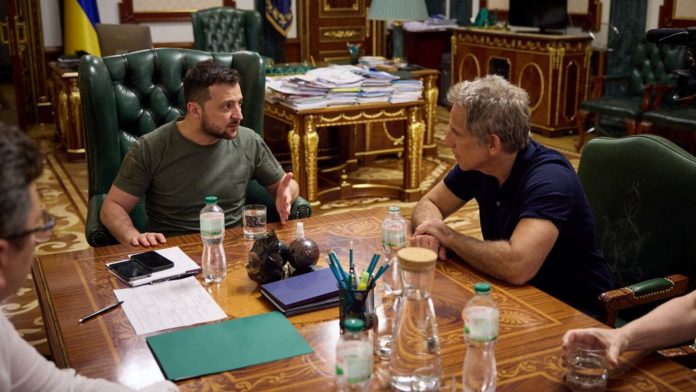 The US actor, 56, who has been meeting with refugees in Poland and Ukraine since 18 June, shook hands with the wartime premier as they met in Kyiv.

He told President Zelenskyy: “It’s great honour for me. You are my hero. You quit a great acting career for this.”

“Not so great as you,” he replied.

But Stiller insisted: “What you have done, the way you rallied the country and for the world, it’s really inspiring.”

The actor spoke of his time visiting the war-torn country, and the devastation he had seen.

“I feel that it’s hard to understand what’s going on here if you haven’t been here.

“We were talking about the actual impact of coming here. I just was in Irpin this morning, saw the level of destruction.

“You see it on TV, you see it on social media, it’s something else to actually see it and feel it and then to talk to people. We have talked to a bunch of people.”

Located not far from Kyiv, Irpin saw heavy Russian bombardment earlier in the war but fierce defence by Ukrainian troops ensured that Kremlin forces got no closer to the capital.

The pair discussed the difficulties keeping the war in Ukraine in the global public eye after so many months of fighting.

President Zelenskyy said: “It is not interesting to speak about the war every day for an audience, for different people, but for us it is very important.

“When people forget to speak about this influence and how to push Russia, it’s very difficult.”

Looking at Stiller, he added: “Thanks to people like you, we can do it.”

Read more: This secret unit’s tanks are virtually invisible, and soldiers have one job – to steal the enemy’s vehicles

As he visited eastern Europe, Stiller has released a video message urging global support for Ukrainian refugees and the 100 million refugees around the world.

In his message he said: “I’m here meeting people who’ve been impacted by the work and hearing how it’s changed their lives.

“War and violence are devastating people all over the world. No one chooses to flee their home. Seeking safety is a right and it needs to be upheld for every person.”

Last week Stiller, who is a UNHCR (United Nations High Commissioner for Refugees) goodwill ambassador, had flown to Rzeszow in southeastern Poland.

On Sunday he was also spotted walking in the western city of Lviv, which has come under attack by Russian forces during the months-long invasion but has remained relatively unscathed compared to the ferocious assaults in the east of the country.

On his Instagram page, Stiller said he was meeting families “whose lives have been torn apart by war and violence in Ukraine“.

He said millions of people have been forced to flee their homes, with more than 90% being women and children, following the invasion by President Vladimir Putin’s troops.

Stiller added: “I’m here to learn, to share stories that illustrate the human impact of war and to amplify calls for solidarity.

“Everyone has the right to seek safety. Whoever. Wherever. Whenever.”

In one image, he was photographed meeting workers from the UNHCR.

In another post, the Zoolander and Tropic Thunder star was pictured hugging two refugee children near the Medyka border in Poland.

Since the war began, a number of stars from the music and film industries have visited Ukraine and its neighbouring countries.

In April, Hollywood actress and UN humanitarian Angelina Jolie made a surprise visit to Lviv where she spoke to displaced people who have found refuge in the city.

And last month, Bono and The Edge from the Irish rock band U2 played a concert in a metro station in Kyiv in support of the Ukrainian people.