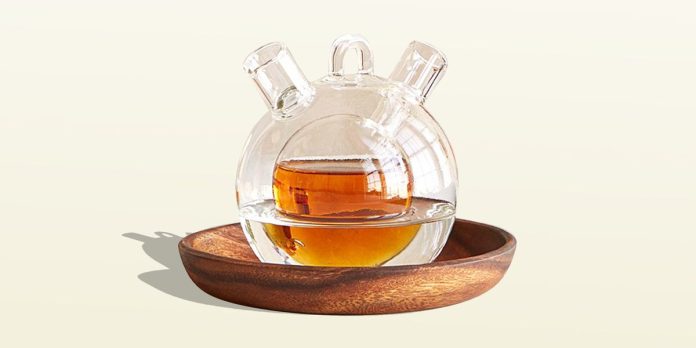 Whiskey drinkers who take the spirit seriously are not messing around. Not even a little bit. They can wax philosophical about Scottish terroir and Kentucky’s limestone water. They’re startling poetic about angel’s share, but militant about barrel staves. They hold celebrity whiskeys to the highest of standards, then fanboy or fangirl out when their favorite independent distiller announces a new blend. So it can be a little intimidating to try to choose an alcohol-themed gift to get one of these big whiskey types, especially if you’re not an expert yourself. But in the end, it’s all about a liquid that’s wonderfully rewarding to drink, and we know a thing or two about that. And we’re more than happy to share our knowledge with you, just like we’d share a dram. Here are the 39 best gifts for people who love whiskey.

Designed to make every drop of whiskey taste its best, this tasting set includes a hand-blown glass, expertly shaped to reduce alcohol burn, and a chilling base that can cool your drink to 45°F in under five minutes—no ice needed.

Why pick one present? A Flaviar membership introduces them to a digital whiskey-drinking club, with access to bottles and tastings, special whiskey releases, member events, and more.

Here’s a straight-forward monthly subscription to some of the best whiskeys, with categories covering Japanese, bourbon, and scotch. Recent selections have included Redbreast Lustau, Kavalan Concertmaster, and Barrell Bourbon 015, which ought to entice.

Dalmore borrowed the essence of Scotch whisky to flavor these decadent truffles. Two vices, satisfied in one box.

This decanter houses whiskey and water in an innovative, original way. It’ll go a long way to dispel any myths about water ruining whiskey.

Cask strength, floor malting, tannins…even the most whiskey-literate person you know would be forgiven for getting tripped up on the distillers lingo. This guidebook will give them a refresher on all terms that matter in whiskey-making.

The Dead Rabbit is a world-renowned bar hiding in downtown Manhattan, with an ethos built on the lore of Irish gangsters and Irish whiskey. Its cocktail recipe book is full of utterly astounding cocktails, as well as a nefarious tale of blood and revenge (and drinking) told in graphic novel form. You have to read it to believe it.

Tap into their inner mad scientist with this cloche and torche, designed to steep cocktails in smoky flavors. That’ll be one hell of an Old Fashioned.

Japanese whiskies, as rare and sought-after as they’ve become, aren’t exactly easy to track down. So do your giftee a solid and score a bottle of Yamazaki 12, a quintessential Japanese offering that makes a long-lasting impression.

Survival is important and all, but so is always having a good age statement on hand. VSSL checks off both with this gadget, a flashlight, compass, bottle opener, and nine-ounce flask with two shot glasses collapsed into one.

Uncle Nearest is a newer distillery, but it digs deep into American history—all the way to the formerly enslaved Black man who taught Jack Daniel how to distill, Nearest Green himself. This bottle will give your giftee a real appreciation for Tennessee whiskey, as well as new insight into the spirit’s backstory.

The impressions at the bottom of this set of hand-blown whiskey glasses match the topography of iconic peaks: Half Dome, Denali, Mt. Rainer, and Mt. Whitney. For the kind of whiskey drinker who’s happiest out of doors.

This gorgeous, leather-bound guidebook serves as an encyclopedia to 700 of the most interesting whiskey makers in the world, from Scotland to Japan to Australia.

For anyone picky about their ice-to-whiskey ratio, this wedge-shaped ice mold and double Old Fashioned glass will give them something to think about.

The correct way to drink whiskey is with a few drops of water to unlock the fullest flavor, or so the Scots say. This crystal dropper ensures they don’t overdo it.

Because it’d be frowned upon to bathe in straight whiskey.

Don’t turn your nose up at this bottled cocktail. For one, it’s mixed from eight-year-old Kentucky bourbon, five-year-old Indiana rye, saffron bitters, and demerara sugar. For another, it comes with an orange zest atomizer. That’s one hell of an Old Fashioned—and one that requires zero prep.

The barrels that hold Pappy’s legendary bourbon later house maple syrup collected from a farm in Ohio, giving us all the gift of bourbon barrel-aged maple syrup. Besides, it’s not like getting them a bottle of Pappy Van Winkle bourbon is feasible.

Sure, this Norlan glass looks cool as hell. But it’s also carefully crafted for drinking chilled whiskey right. A win-win.

This scientifically designed snifter is used by whiskey competition judges. Get it for the drinker who can spin a professional-level yarn about the notes, aromas, and nose of a whiskey.

Dram In a Can Irish Whiskey

Making the world’s first whiskey in a can isn’t the only groundbreaking thing Two Stacks is accomplishing in Ireland, but it is the most giftable. Imagine a picnic with a four-pack of these in two.

There are a million and one excellent, award-winning single malts that are worthy. But for our money, we’d gift Mortlach’s Wee Witchie, a flavorful expression distilled in an intriguing “2.81” method from a relatively under-the-radar distillery. It will surprise and impress.

Lagavulin’s 16 Year Old is a bonfire of a whisky, layering smoke on smoke on smoke atop a vanilla and spice foundation. In other words, a peaty single malt experience that cannot be missed.

Dickel bucked its Tennessee whiskey tradition and released an eight-years-aged bourbon that is a surprise of a sipper. Just ask our 2021 Esquire Spirit Awards lineup, which this bottle kicks off.

Maker’s Mark may be a bourbon heavyweight, but it isn’t afraid to get weird. Its Wood Finishing series, for which the distillery doctored already-matured whiskey with different wooden staves to draw out more flavor and character, is experimental and small batch—and covetable. (That explains the price.)

To tide them over in that short space of time between dinner and after-dinner drinks.

The Japanese whisky category has largely been defined by the Suntorys and the Hibikis and the Yamazakis. But there’s a funkier side to Japanese whisky. Ohishi Port Cask is one that contains an abundance of chocolate, fruit, and spice aromas.

Barrelsmith learned a thing or two from whiskey distilling and stuck its Boulevardier, Manhattan, and Negroni in charred oak barrels to deepen their flavors.

A whiskey aficionado is always in the mood to sip a nice one ASAP. Saucey, thankfully, will deliver them gems of bourbon, scotch, or rye within 30 minutes. All they need is a gift card of $20 (or $2,000) from you to satiate their thirst.

This is a no-holds-barred spice bomb of a rye whiskey—getting them a bottle is the equivalent of a double-dog drinking dare. Plus, High West is an innovative Utah distillery they’ll definitely want to keep tabs on if they aren’t already.

We’ve never met a whiskey cocktail we didn’t like—unless, of course, that cocktail was poorly made. This elegantly crafted shaker does the art of cocktail-making justice, with features hidden in every curve of stainless steel.

Cocktail cherries are a must for many whiskey cocktails that get made at home, like Manhattans. Especially Manhattans.

Serve whiskey from something rad and retro, like this 24K-gold-and-porcelain decanter. Plus, it’ll replace all those sticky, half-empty bottles of booze on the bar cart.

If you’re looking for something for the whiskey drinker who thinks they’ve seen it all, point them in the direction of American single malts like Stranahan’s much-lauded Colorado whiskey. The category is newer, more niche, and relatively lawless, which adds to its intrigue.

This book from Esquire contributor Aaron Goldfarb welcomes drinkers to the strange side of whiskey, where marijuana infusions, Pappy Van Winkle Jell-O shots, and more reign, taking all the stuffiness out of it.

Get Expert Advice on What to Drink, Every Day