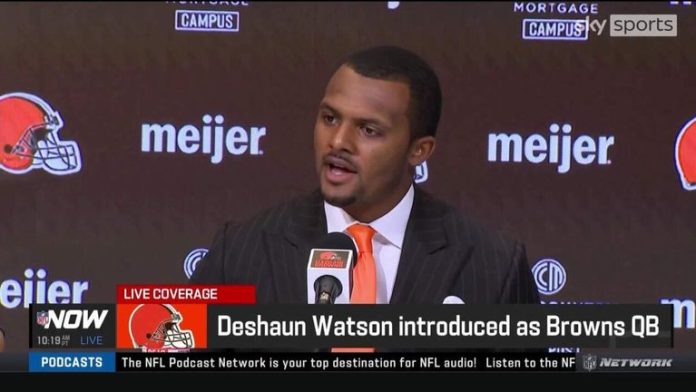 The first of 24 lawsuits filed against Deshaun Watson alleging sexual misconduct came in March 2021; original complainant Ashley Solis is one of four cases said to not be settled, according to their lawyer; Watson has denied all accusations

Cleveland Browns quarterback Deshaun Watson has reached confidential settlements with 20 of the 24 massage therapists who filed civil lawsuits against him alleging sexual misconduct, according to the attorney representing the women.

In a statement released on Tuesday, attorney Tony Buzbee said those 20 cases will be dismissed as soon as the paperwork is completed, adding that the lawsuits filed by original complainant Ashley Solis and “three other brave women” have not been settled and their cases will continue.

“I look forward to trying these cases in due course,” Buzbee said.

Watson has previously denied the accusations made against him, telling reporters last week: “I’ve never forced anyone. I’ve never assaulted anyone.

“I’ve been saying it from the beginning and I’m going to continue to say it.”

Solis and the other women suing Watson allege that he committed sexual improprieties during the course of massages. Two grand juries in Texas declined to bring criminal charges against him earlier this year.

“The cases against Deshaun Watson started with one phone call, from one brave and strong woman. That woman was Ashley Solis,” Buzbee’s statement Tuesday began.

“Even though she was originally turned away by our screening process, my staff insisted that I personally speak with her. I’m glad she persisted. Once we took a second look, and after having contact with Watson’s original lawyer who disrespected Ashley and her profession and who arrogantly minimised the conduct of someone he referred to as an ‘asset’, I was convinced that our law firm should try to help her.

“As a result of Ashley’s lone but brave voice, soon many women who had allegedly experienced the same conduct were emboldened to step forward. I am incredibly proud to represent them all.

“They have endured vile criticism and fanatical ignorance. They faced withering cross examination by skilled litigators and stood firm. They are warriors all.”

The Browns acquired Watson from the Texans in a trade in March and gave him $230m in guaranteed money on a five-year deal.

The NFL continues to investigate separately and recently wrapped up its interviews with Watson. Despite no criminal charges being filed, the NFL could suspend him for violating the league’s personal conduct standards.

Watson did not play during the 2021 NFL season. In 2020, the three-time Pro Bowl selection led the NFL with 4,823 passing yards and set a career high with 33 touchdown passes and just seven interceptions while with the Houston Texans.