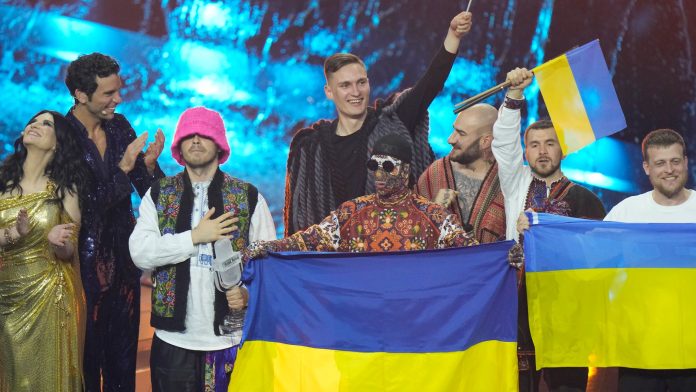 Kalush Orchestra, who won this year’s Eurovision for Ukraine, will perform at Glastonbury Festival this week.

The band won with their catchy song Stefania at the annual singing contest in Turin last month.

Now they will be taking to Shangri-La’s Truth Stage on Friday to share their brand of “Ukrainian folk music, rap, and hip hop”.

Formed in 2019, Kalush Orchestra are made up of founder and rapper Oleh Psiuk, multi-instrumentalist Ihor Didenchuk, and dancer Vlad Kurochka.

The band’s frontman Psiuk said: “We are so excited to be playing at Glastonbury Festival alongside some of the biggest names in music from around the world.

“This is the perfect place for our first ever British performance, and we hope it will be the start of many in the UK.

“We are very grateful for all the support we receive from the people of Britain, both for us and our country, and we are preparing a very special Ukrainian surprise for the fans at Glastonbury.

Their performance at Worthy Farm will mark their first ever in the UK, and the band have become global stars following their Eurovision win with Stefania, which was dedicated to Psiuk’s mother.

Since their victory, the band have been spending time in Ukraine and abroad in Germany to promote the release of the music video for Stefania.

They also auctioned off the glass microphone trophy they won at Eurovision to raise money for the Ukrainian army.

Kalush Orchestra were fighting as part of the Ukrainian resistance only weeks before Eurovision, and have received support from across Europe.

They beat the UK’s entry Sam Ryder, who came second, and last week it was revealed that the BBC is in talks with the European Broadcasting Union about hosting Eurovision, after the body ruled it could not go ahead in war-torn Ukraine next year in the tradition of the winning country hosting.

A number of other Ukrainian acts will perform at Glastonbury amid the Russian invasion of their country, with Kyiv folk quartet DakhaBrakha performing on Sunday afternoon on the Pyramid Stage.

Go-A will open the John Peel Stage on Saturday with a performance of electronic folk music and soaring vocal melodies.

The group, who formed in 2012, represented Ukraine at the Eurovision Song Contest in 2021 with their dance track Shum, coming in fifth, and band member Ihor Didenchuk is also a member of Kalush Orchestra.

There will be more than 80 artists set to perform, with other big names including US pop star Olivia Rodrigo, Lorde and Noel Gallagher’s High Flying Birds.