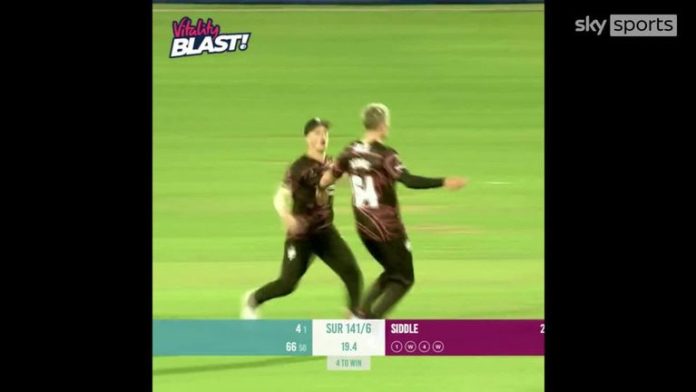 Conor McKerr hit a four off the final ball as Surrey maintained their place at the top of Vitality Blast’s South Group with a nail-biting victory over second-placed Somerset.

McKerr smashed the only delivery he faced through the covers to deny Peter Siddle a hat-trick and his side the points in dramatic style at the Oval.

Replying to Somerset’s 144-8, opener Will Jacks got the home side off to a solid start and was still there unbeaten on 66 at the end, with 32 of his runs coming in boundaries.

Earlier Tom Banton had top-scored for the visitors with 39 as Gus Atkinson and McKerr took two wickets apiece to limit the damage.

Joe Denly, Jordan Cox, Alex Blake and Jack Leaning, who hit an unbeaten 37 from just 18 balls, all made it into the thirties but no further, as Mohammad Amir and Josh Shaw took two for 30 and two for 36 respectively to limit the home side to 190-5 from their 20 overs.

Sam Northeast plundered a 46-ball 89 as Glamorgan romped to an eight-wicket victory over Middlesex at Cardiff.

Set 172 for victory, the home side got there with 5.4 overs to spare after Northeast, who scored three sixes and 12 fours, and skipper David Lloyd had put together an opening stand of 150.

Earlier Max Holden’s half-century had provided the foundation for Middlesex’s total of 171-7.

The opener had reached 58 from 51 balls when he was caught off the bowling of Dan Douthwaite in the penultimate over, and Joe Cracknell’s 33 and a quick-fire 19 from Luke Hollman boosted the tally, although ultimately not far enough.

In the North Group, Northamptonshire’s Saif Zaib fell eight runs short of a fine century and ended up on the losing side as Derbyshire eased to a six-wicket victory with an over in hand.

Zaib blasted 92 from 58 balls, clearing the boundary four times and finding the rope on eight occasions, before he was run out by George Scrimshaw as the visitors eased to a competitive 186-7.

However, 57 from opener Shan Masood and Wayne Madsen’s belligerent 73, featuring 10 fours and two sixes, eased the home side towards the finishing line and Leus du Plooy and Brooke Guest completed the job.

Naveen-ul-Haq claimed four for 24 off just 22 balls as he helped bowl Leicestershire to a 47-run win over Nottinghamshire at Trent Bridge.

The visitors made 170 all out from their full allocation with Lewis Hill (39) and Arron Lilley (23) putting on 45 for the third wicket before Wiaan Mulder’s 27 and 29 from Ben Mike gave them something to defend.

Only England opener Alex Hales, who made 55 from 43 deliveries, threatened to wrest the advantage from Leicestershire and Nottinghamshire still had two balls remaining when last man Dane Paterson was dismissed by Naveen.