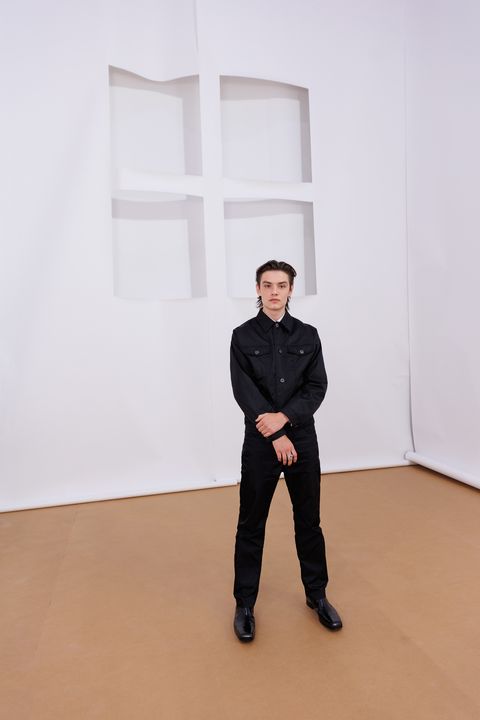 It takes versatility to succeed in Hollywood, and actor Louis Partridge seems to have it in spades. In fact, by our measure, he’s a hyper-chameleon. In 2020, he played the aristocratic and polished Viscount Tewkesbury in Netflix’s Enola Holmes (alongside fellow Brit Millie Bobby Brown), before switching gears to embody a totally opposite persona: Sid Vicious in FX’s Pistol, a miniseries about the rise and fall of the Sex Pistols directed by Danny Boyle (out now).

In between those antipodal roles, Partridge also took a turn in the high fashion spotlight: He has modeled in both campaign and runway format for Prada (and we all know Prada is pretty damn selective when it comes to their casting). Aquiline yet feline, sharp yet soft, fluid yet fortified: There’s just something about Louis. Here, after catching Prada’s most recent Milan menswear show, Partridge chats with Esquire about what’s on deck (hello, Alfonso Cuarón), stanning Raf Simons, and the importance of stress on the job.

Hey Louis. Thanks for the chat. We wanted to start by asking about your ongoing experience with Prada–what do you most connect with at the brand? What about Miuccia and Raf’s work resonates with you?

I first admired Prada for their classic silhouettes. I’ve always been a fan of simple and classy, and I think Prada does that better than anyone. With Raf, I became aware of his work when I started getting into fashion as a teenager. Walking round London, his clothes would always stand out to me as they always seemed to go against convention in one way or another. His first pieces I noticed were the Ozweego tennis shoes, his loose-knitted jumpers, and his denim with Calvin Klein. Though I couldn’t afford any of it, I used to go to Dover Street Market and try it all on. I think the combination of their two styles creates something classic yet constantly evolving, and I love that. I’m always surprised.

Partridge at the spring/summer 2023 Prada show in Milan.

What did you think of the spring/summer 2023 show?

I loved the show, mainly because I enjoyed the peace of mind I felt sitting and watching, rather than walking this time. It’s more stressful than it looks, I promise! I also couldn’t believe how their space had transformed. The entire set was made out of paper. With the clothes, I thought some of the leather stuff was brilliant, including the new boots. And I’ll definitely be trying to get my hands on some of those jumpers with colorful stripes when they’re released.

Tell us about the reception around Pistol since it was released a few weeks ago. What has been the best part about it? Or, the most surprising part? Have there been any memorable fan stories or feedback points?

The surprising part is people stopping me to tell me they’ve seen it. Occasionally, I forget that it’s actually out. With it being made during the pandemic, it just felt like such a contained thing, so for it to be living in the wild is both daunting and exciting. 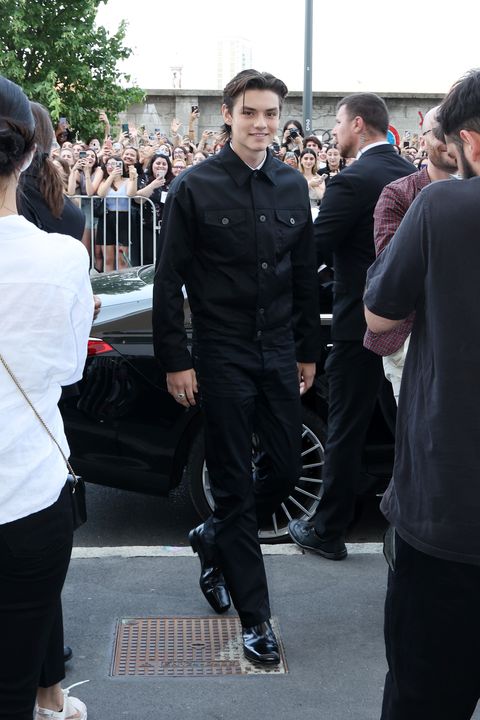 Partridge arrives amidst a sea of fashion fans at the Prada show.

What was the single most rewarding thing, to you, in making the show? How come?

There’s a lot of pressure when being trusted with a story like Sid’s. I think the ability to tell his story–and depict his life in a way that feels true–is a real privilege. Hearing positive feedback from the people who were there is probably the most rewarding part of all. Knowing that you’ve told the story honestly makes it all worth it.

There’s one scene in particular that stood out to me. I needed to get it exactly right, not only for the character but also for people to connect with him. It’s the final scene, in the Chelsea Hotel, the site of Nancy’s death. I’d stressed over it for the entire shoot, gone on a diet specifically for it, and just desperately wanted to do it properly. I really cared about it. I’ll never forget the sense of relief when it was over. It felt like I could finally relax. So that was pretty rewarding, but it definitely took its emotional toll!

Are you able to tell us a bit about what you’re working on next?

I’m very excited to start working with Alfonso Cuarón on a series called Disclaimer. Like with Pistol, it’s a challenging part, but a great opportunity to learn from some real masters of their craft. I’m nervous, but have learned from experience that it’s important to feel nerves–it means you care, and when you care about something, you work harder at it. It’s an actor’s job to make the audience care, and if you’re not interested then there’s no reason they should be.

I’m nervous, but have learned from experience that it’s important to feel nerves—it means you care.

What are your summer plans? Do you have any summer traditions?

I’ll be going on a summer holiday with my family for the first time in five years. Every single year I, rather conveniently, always seem to be working. And it’s the one time the whole family can get together, so I’m very much looking forward to it. Although, I’m not exactly hopeful. Knowing my luck, something will probably pop up last minute. I can’t really complain though; I’m lucky to be working, full stop.