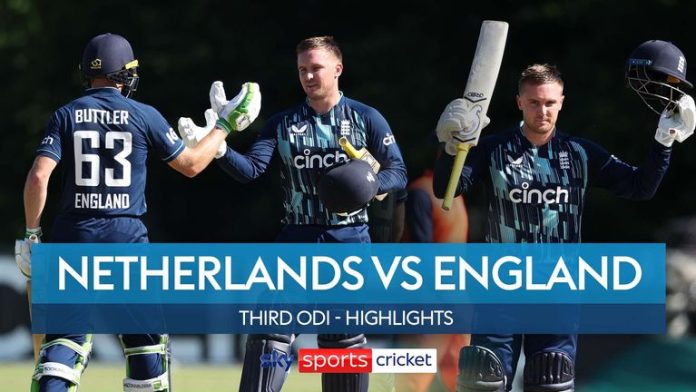 Jason Roy (101no) and Jos Buttler (86no) share in 163-run stand to see England to eight-wicket win with 119 balls to spare; tourists win series 3-0; watch the Test team in action in the third Test against New Zealand, live on Sky Sports Cricket from 10am, Thursday

Jason Roy hit a 10th one-day international hundred as England romped to a 3-0 series whitewash of the Netherlands, chasing down 245 in just 30.1 overs to win the third and final ODI at Amstelveen.

Roy cracked 15 boundaries in his unbeaten 101 off 86 deliveries, and Jos Buttler smashed seven fours and five sixes in his 86 not out from 64 balls as the tourists made light work of their modest target.

One particularly remarkable passage saw Buttler score 13 off two balls as Paul van Meekeren bowled a double-bounce no-ball that Buttler dispatched into the stands, before then striking the resulting free hit for six more.

David Willey was the pick of the bowlers, taking 4-36 to help dismiss the Dutch for 244, while fellow left-armer David Payne (1-38) sent back Netherlands captain and top-scorer Scott Edwards for 64 to claim his maiden ODI wicket on debut.

Edwards was one of three batters to pass fifty for the hosts, Max O’Dowd (50) and Bas de Leede (56), the others, but all three were guilty of failing to kick on further and catapult their side up to a more challenging score.

After England came racing out of the blocks in their reply – Roy and Phil Salt (49 off 30) putting on 85 in less than 10 overs – Van Meekeren (2-59) briefly derailed the innings with two wickets in three balls.

Salt and Malan were both bowled, the latter round his legs for a second-ball duck, but it only succeeded in bringing the supremely in-form Buttler to the crease – and he and Roy swiftly reeled in their target with minimal fuss.

Payne made to wait for debut strike

Buttler, standing in as captain for the absent Eoin Morgan, out with a groin injury, opted to insert the Netherlands at the toss and was quickly rewarded for his foresight, with Willey dismissing Vikramjit Singh (6) in the fifth over.

Payne too should have had an early breakthrough, with Tom Cooper – on nought – top-edging him high into the air in the next over, only for Liam Livingstone to lose the ball in the sun and bail out of the catch. The Gloucestershire seamer would have to wait to the penultimate over of the innings to finally grab his first wicket in ODI cricket.

Cooper cashed in on the error, putting on 72 for the second wicket with O’Dowd, before Livingstone (1-40) went some way to atoning for his error by eventually claiming Cooper (33) on the deep-square boundary and picking up O’Dowd caught behind with the ball.

De Leede and Edwards rebuilt, another sizeable stand of 84, but the Netherlands’ scoring badly slowed and once the former perished to Brydon Carse (2-49), a flurry of wickets followed as the lower order desperately tried to up the rate in the final 10 overs.

Adil Rashid (1-41) picked up Teja Nidamanuru for four, courtesy of a crisp stumping from Buttler behind the stumps, Tim Pringle was run out after a dreadful mix-up with Edwards, and Willey mopped up the tail.

England’s reply got off to a blistering start, with Roy and Salt responsible for as many as 15 boundaries in the opening nine and a half overs, compared to the 17 scored by the Netherlands in their entire innings.

The home attack was guilty on multiple occasions of bowling too short, with the England openers feasting on anything banged in, before Van Meekeren finally found the right length to bowl Salt – one shy of a third score of fifty or more in the series – and then pick up Malan two balls later.

But there would be no dramatic batting collapse, with Roy and Buttler sharing in an unbroken 163-run stand in 125 balls to see England home with 119 deliveries to spare.

Roy did offer up one chance on 72, Fred Klaassen shelling a sharp return catch off his own bowling, but then breezed through to a 10th ODI ton off 86 balls before Buttler sealed an emphatic victory with a fifth six of his fine innings.

Roy and Buttler agreed afterwards that the future was bright for England given the depth of talent, with the stand-in captain calling out Salt, Carse and Payne for praise.

Buttler also gave his backing to Morgan, saying he was bemused at speculation over his future and insisting that everything the limited-overs captain has achieved “doesn’t just go away overnight”.

Morgan has revolutionised England’s white-ball fortunes and led them to a first 50-over World Cup crown in 2019, but he is without a half-century in one-day internationals and Twenty20s in almost a year.

He registered two successive ducks against the Netherlands and missed Wednesday’s eight-wicket victory.

His absence was described as precautionary but even if form and fitness issues persist, Buttler, who stood in as skipper for the final match against the Dutch, insisted Morgan retains the team’s backing.

“There’s certainly no questioning of his position from within the camp,” said Buttler.

“I can’t put into words what he’s achieved. Everyone always talks about his captaincy but you forget what a brilliant batsman he’s been for England in over 200 ODIs, that doesn’t just go away overnight. Everyone in the team is backing him.”

Test captain Ben Stokes was even more forthright in his defence of his white-ball counterpart.

“Well, he’s only had two low scores so I wouldn’t say he’s going through a hard time at the moment,” said Stokes on the eve of England’s third Test against New Zealand at Headingley.

“I think the press are the only ones giving him a hard time and I think the players have shown it’s not an issue with them.

“People are allowed to not score many runs and more than that he’s our captain. He’s a phenomenal leader and always will be so I’ve got no issues with anything going on with him at the moment.”

Watch the third LV= Insurance Test between England and New Zealand, from Headingley, live on Sky Sports Cricket and Sky Sports Main Event from 10am on Thursday.