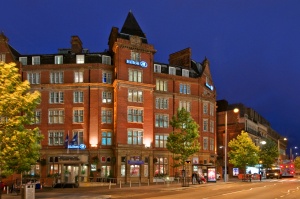 Hilton Nottingham is placing the finishing touches on a £6.5 million hotel transformation project, which includes the redesign and comprehensive refurbishment of 176 guest rooms, including bathrooms, corridors, noise insulation, installation of air-conditioning throughout and reviewed layouts in the bedrooms. This compliments the lobby which was completed during the pandemic.

Sue Cave, general manager, Hilton Nottingham, said, “We are thrilled to present this stunning and modernised hotel to our guests. I feel honoured to have been a part of this amazing renovation project and thank all our local residents, team, and customers for their patience throughout. It has certainly been worth the wait and we look forward to welcoming guests to experience this brand new offering and continuing to deliver our signature, first class hospitality at Hilton Nottingham”

During the renovation process, the team at Hilton Nottingham have enjoyed finding out more about the history of the hotel with the help of local historian, Janine Tanner. Hilton Nottingham was originally built on the site next to the old Nottingham Victoria Station which opened in 1900. Once the railway station was nearing completion, a meeting was held in July 1899 between the Nottingham Joint Station Committee and Sir John Blundell Maple Bart MP in which an agreement was signed for the Maple company to build a hotel attached to the as-yet unnamed station. The hotel opened in 1903, three years after the Victoria Station was completed, and as the station now had an official name, naturally the hotel would follow suit, and proudly bore the name ‘Victoria Station Hotel’. Sometime during the latter part of the Victoria Station’s life (after 1950) the word ‘station’ was dropped from the hotel’s name, and it became the ‘Victoria Hotel’.

After the station had been demolished in 1967, the Victoria Hotel opened a railway-themed pub in the basement, called the ‘Whistle Stop’. Seating in the Platform Bar was made up of an array of luggage trollies and milk churns, and the room was adorned with railway posters. There was also the Waiting Room Bar and buffet, and the Carriage Bar.

Hilton Nottingham is located in the heart of the city, next to the Victoria Centre. The hotel is in a family- friendly location with many attractions within walking distance, including Theatre Royal, Nottingham Trent University, Nottingham Castle, Old Market Square, and Motorpoint Arena. Wollaton Hall is a 15-minute drive away, and the hotel is just 40 minutes from Sherwood Forest.