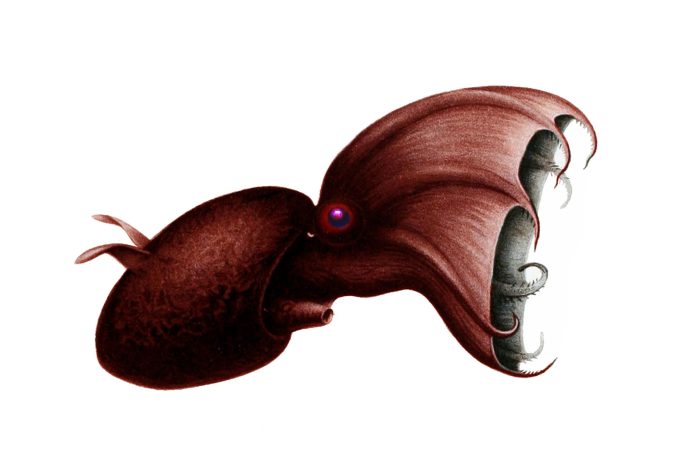 For all cephalopods, no two tentacles are exactly the same. This cluster of intelligent sea creatures including octopus, squid and shelled nautilus, possess a plethora of arms (in some species, as many as 90). In fact, a new study of fossilized specimens in Scientific Reports finds that an ancient cephalopod species called Vampyronassa rhodanica could have had specialized suckers along their arms to tightly clutch their prey — a fact that completely challenges previous perceptions of the species.

Fossil specimens of V. rhodanica reveal that the species possessed small, oval-shaped bodies with eight webbed arms and two flexible fins. Other than that, V. rhodanica remains mostly mysterious because the soft tissue of its body tended to decay before time could preserve it.

With few well-preserved fossils to study, scientists typically assumed that the species — one of the oldest known ancestors of today’s vampire squid — behaved similarly to its modern-day descendants. They thought it drifted through the depths of the ocean, biding time until food, in the form of detritus, floated by.

Turning that assumption around entirely, a team of researchers from Sorbonne University’s Center for Research on Paleontology implemented non-invasive imaging techniques to examine more than 164-million-year-old fossils previously found in La Voulte-sur-Rhône in Southern France. Their investigation found that V. rhodanica probably possessed a smattering of super-strong suckers toward the ends of two extended dorsal tentacles.

Though a unique trait from the vampire squid, many modern-day species use similar appendages and suckers to create strong suction forces. This allows them to seize and retain squirming prey.

The team says that the presence of these super-strong suckers indicates that V. rhodanica probably prowled through the open ocean an active predator, instead of a peaceful forager. Though further fossil evidence could certainly reveal more, for now, one thing seems absolutely clear: V. rhodanica was a cephalopod to avoid.