Home World Reptiles And Amphibians Could Hold The Secret To Longevity 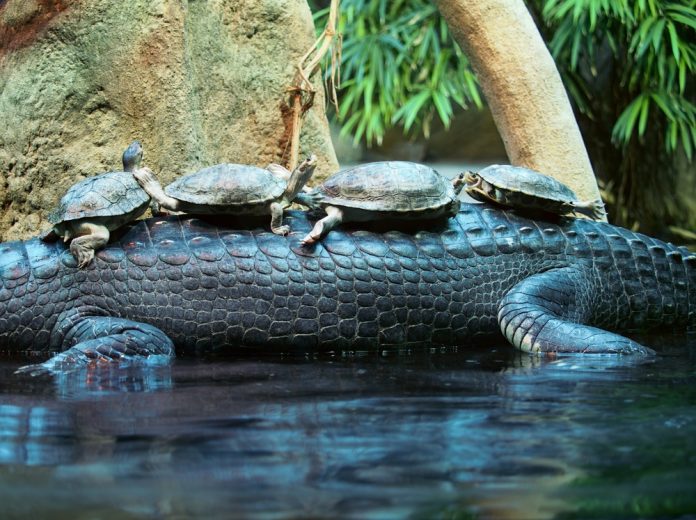 Imagine living to 190 years old. You’d witness many historical moments and advancements in society throughout those years. While this longevity may not exist yet for humans, for the giant Seychelles tortoise, the oldest land animal in the world, this is a reality.

The now-famous giant tortoise is turning 190 in 2022 and thanks to a recent study, researchers may know why he and other ectotherms — cold-blooded animals — live longer lives. Penn State and Northeastern Illinois University led a team of 114 international scientists, who composed one of the most comprehensive studies of aging and longevity to date. They collected data from 107 populations of 77 species of reptiles and amphibians from across the world.

The study, published in Science, documents the first time turtles, salamanders, and crocodilians have a slower aging rate and longer life spans compared to their size. Researchers also found that turtle or tortoise shells may contribute to slower aging, or even “negligible aging” — the lack of biological aging.

“Anecdotal evidence exists that some reptiles and amphibians age slowly and have long lifespans, but until now, no one has actually studied this on a large scale across numerous species in the wild,” says David Miller, senior author and associate professor of wildlife population ecology, Penn State, in a press release.

“If we can understand what allows some animals to age more slowly, we can better understand aging in humans, and we can also inform conservation strategies for reptiles and amphibians, many of which are threatened or endangered,” says Miller in a press release.

The team used comparative phylogenetic methods to determine an organism’s evolution. They captured the organisms from the wild, tagged and then released them. Scientists then aimed to analyze the aging and longevity of ectotherms vs endotherms (warm-blooded animals) to determine if body temperature regulation and protective traits like shells or scales impacted longevity.

The “thermoregulatory mode hypothesis” suggests that ectotherms — which require external temperatures to regulate their body temperatures and often have lower metabolisms — age more slowly than endotherms, which internally generate their own heat and have higher metabolisms, explains Miller in a press release.

Read More About The Age Of Sea Turtles, Here:

The findings however suggest that body temperature isn’t a solid indicator of longevity.

“We didn’t find support for the idea that a lower metabolic rate means ectotherms are aging slower,” says Miller in a press release. “That relationship was only true for turtles, which suggests that turtles are unique among ectotherms.”

While  body temperature may not impact the longevity of reptiles, the recent findings suggest their protective phenotypes may make an impact, or their shells, scales, spines or venom. Because an animal has these phenotypes, predators are less likely to eat them.

“They’re more likely to live longer,” Beth Reinke, first author and assistant professor of biology, at Northeastern Illinois University, explains in a press release. “We found the biggest support for the protective phenotype hypothesis in turtles. Again, this demonstrates that turtles, as a group, are unique.”

These findings suggest that animals with these protective phenotypes age slower because they are less likely to die and not pass on their DNA or create offspring.

The team noticed that some of the organisms studied showed signs of negligible aging, meaning it seemed like they didn’t age at all.

“It sounds dramatic to say that they don’t age at all, but basically their likelihood of dying does not change with age once they’re past reproduction,” says Reinke in a press release.

Miller explains in a press release, “If an animal’s chance of dying in a year is one percent at age 10, if it is alive at 100 years, its chance of dying is still one percent. By contrast, in adult females in the U.S., the risk of dying in a year is about one in 2,500 at age 10 and one in 24 at age 80. When a species exhibits negligible senescence (deterioration), aging just doesn’t happen.”

Thanks to the collaboration of dozens of researchers and scientists, the team is hoping the results could lead to possible studies that investigate how humans age.