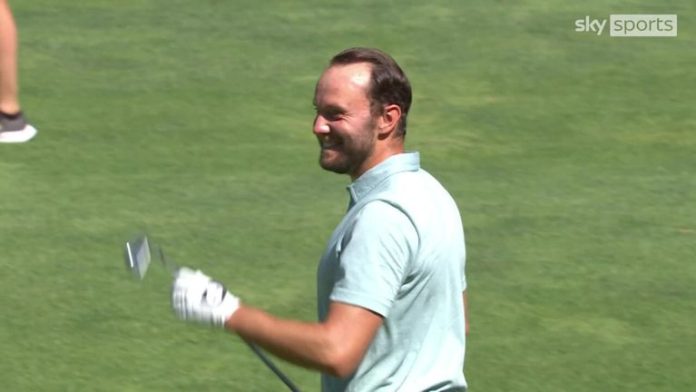 Haotong Li started the BMW International Open in Munich with a 10-under-par 62 to take the lead after the opening round; home favourite Marin Kaymer is the highest placed of 10 LIV Golf Invitational series players in the field on six under par

China’s Haotong Li equalled his career-best round and also the course record with a 10-under-par 62 to take a one-stroke lead at the BMW International Open in Munich.

The 26-year-old, who finished third in the 2017 Open at Birkdale after a final-round 63, had previously shot the number at the 2019 Saudi Invitational.

Starting at Golfclub Munchen Eichenried’s 10th hole he turned in 32 after four birdies but played his final six holes in six under par thanks to two eagles at the par-fives.

At the sixth he hit his 207-yard approach to six feet but produced an even better shot at his final hole to leave himself a four-footer for another eagle.

That gave him a two-shot clubhouse lead but that deficit was halved after Dutchman Daan Huizing carded nine birdies later in the day.

“It’s been an incredible day for me. I didn’t expect that as I’ve had a couple of weeks off in Dubai and I didn’t practise much,” Li told europeantour.com.

“But I had a good start – two birdies in the first three holes.

“Then on my back nine I think I had six one-putts in a row, which helped, and hit every fairway I think. The last few weeks I’ve been playing solid, just couldn’t put together.

“And hopefully this week I can get some experience from there and put things together.”

Former major winners Sergio Garcia, Louis Oosthuizen and Martin Kaymer were among 10 players signed up to the LIV Golf Invitational series to tee off in the first European Tour event to start since the PGA Tour said it would suspend any of its players who join LIV.

Kaymer was the best of the LIV players, finishing as one of six players tied for fourth on six-under par, four strokes behind Li. Oosthuizen was on two under and Garcia one over.

It was a day to remember for another German, Max Kieffer, who produced a rare three-under albatross when he holed his second shot at the par-five 11th.