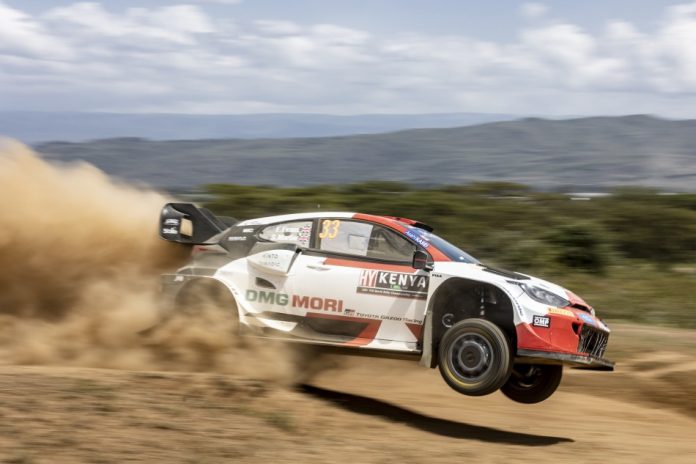 The Welshman was one of few drivers to enjoy a trouble-free drive as the monster Kedong test – which rounded off the loop – decimated some of the FIA World Rally Championship’s big names.

Evans was hot on the heels of team-mate Sébastien Ogier for the majority of the loop – the French driver managing an early lead which he opened up on Thursday afternoon’s opening super special.

However, when Ogier’s Yaris was left down on power after scooping up some of Kedong’s famous fesh-fesh sand, the Welshman jumped ahead and held an 8.5sec advantage at service.

“We had a good run in the first one, but I was a bit disappointed with the second stage. I felt we could have done much better in there. The final one was always going to be a bit of a lottery, I think.

“I was definitely on the careful side, and this afternoon it’s going to be a different story again, so it’ll be difficult to judge the speed,” he added.

Kalle Rovanperä was just 2.6sec down on Ogier after taking two stage wins. As championship leader, the Finn was on road-opening duties, but he coped admirably with the loose conditions.

“The first two were not so bad,” he explained. “Okay, there was some cleaning for us, but the last one was a proper Safari stage. It was properly tough.”

Takamoto Katsuta was another 1.3sec in arrears, while Craig Breen completed the top five in an M-Sport Ford Puma. He ended 22.6sec back from the leaders after inheriting the position from Loeb, whose similar car suffered a small engine fire at the end of Kedong before retiring on the road section shortly afterwards.

Ott Tänak was the best-placed Hyundai driver in sixth on what was a fraught morning for the team. A snapped gear lever on the opening test cost the i20 N pilot almost 30sec, although he was able to effect a makeshift repair by using the spare wheel brace as a temporary shifter.

Kajetan Kajetanowicz brought up the rear of the leaderboard in 10th overall and also led the WRC2 category with his Škoda Fabia Rally2.

Also in trouble was Gus Greensmith. His Puma shed a rear right tyre at Kedong, then a small fire in the wheel arch area forced him to pull over. The Briton was able to continue after making stage-side repairs but dropped over 13 minutes.