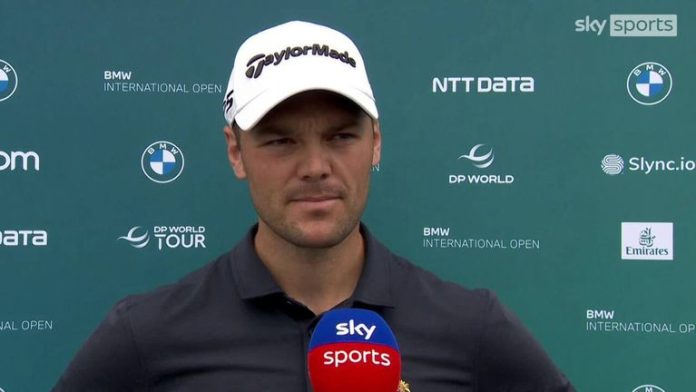 China’s Haotong Li continues to lead the BMW International Open after a five-under par second round; New Zealand’s Ryan Fox is one shot behind in second, with Daan Huizing two shots back in third

Haotong Li holds a one-shot lead at the halfway stage of the BMW International Open in Munich after shooting a five-under-par 67 on a weather-interrupted second day.

Li, who equalled the course record on the opening day, mixed two bogeys with five birdies and an eagle to stay ahead of the field.

He is a shot clear of New Zealand’s Ryan Fox, who was eight under in his second round.

“To be honest, I didn’t drive the ball as well as yesterday,” said Li.

“My short game was OK. It depends when you get in the rough, the lie could be really bad, or it could be good. Sometimes you just need luck.

Fox completed his bogey-free round after a two-hour interruption because of lightning.

He eagled the sixth like Li did. When he resumed on the 11th hole, he birdied that, and finished his round with a sixth birdie to finish on 14 under par.

Two shots behind Fox on 12 under was Daan Huizing of the Netherlands, who carded a 69 after his opening 63.

Jordan Smith of England (66) and Thomas Pieters of Belgium (64) were tied for fourth on 11 under, four off the pace.

“I’m feeling great,” he said. “I think I’ve only missed two cuts this year. It’s been working, especially off the tee, I’ve improved a lot and it’s back to where I was.

“I just need to keep grinding, keep improving and showing up. I was feeling the pressure on the last few holes and I think the weekend will be the same. Hopefully I can just play my golf and keep calm.”

Kaymer calls for tours to find ‘solution’ over issues

Martin Kaymer has urged golf’s leading bodies to come together to find a “solution” after the backlash to the launch of the Saudi-backed LIV Golf Invitational series.

A number of golf’s top players, including former world No 1 Brooks Koepka, Phil Mickelson and Bryson Dechambeau, have signed up for the breakaway LIV series.

The PGA Tour banned all its members who competed at the opening LIV event earlier this month, and the DP World Tour has now acted by announcing that LIV players will be banned from future tournaments, including the Scottish Open in July.

Those who competed at the first LIV event at Centurion Club, including Kaymer, will also be fined £100,000.

“The fine is a lot of money, this is one thing, but I would be happy paying it, but I love to play golf,” Kaymer told Sky Sports.

“That’s my job and what I love to do. They made the decision, is it right or wrong? I am happy to pay it, but I would love to play in Scotland, it’s one of the biggest tournaments on the European Tour.

“Unfortunately there are so many spots given to the PGA Tour that some of the guys that love to play in Scotland, especially Scottish players, are not getting in. I would love to play, I have won it before, but that’s the decision made and we need to live with it.

“I made my choice and I can live with anything that comes my way. I am happy to play golf anywhere in the world, I’m happy to support any tour because I believe in all the tours in different ways.

“If it comes down to this that we are not allowed to play any tournaments then it is what it is.”