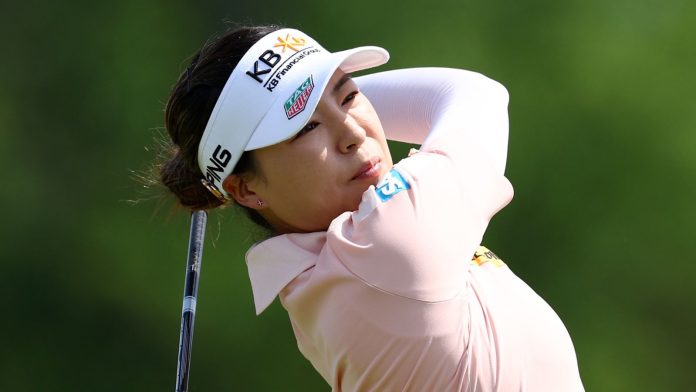 In Gee Chun remains in control of the Women’s PGA Championship after shooting a three-under-par 69 in her second round; Chun is six shots clear of nearest rivals Lydia Ko and Jennifer Kupcho at Congressional Country Club

Two-time major winner In Gee Chun continues to lead after the second round of the Women’s PGA Championship.

The 27-year-old broke the Congressional Country Club record with an eight-under-par first round, and has a six-shot lead at 11-under-par in the second.

Lexi Thompson made a late eagle to finish on three under par, but defending champion Nelly Korda slipped back with a two-over-par 74. Georgia Hall is on one under par after a round of 69.

After her record-breaking opening round, Chun returned in similar form as she birdied three of her first five holes.

Back-to-back bogeys at seven and eight checked her progress, but a birdie at the par-three 10th and another to finish on 18 saw her remain in a commanding position.

Ko climbed up 13 spots into second after making five birdies on the front nine, while Kupcho mixed seven birdies with three bogeys to also finish on five under par.

Two-time major champion Ko said: “I think the last couple of weeks it was a few silly mistakes, a few shots where I lost focus a little bit costing me a couple of shots from there. Other than that, I feel like the game is in a pretty solid place.

“At the same time, I think it is very difficult to win. The level of play on our tour is incredible. You can see just by the scores week in, week out.”

Thompson, who had the lead at last week’s Meijer LPGA Classic before faltering on the final nine, said: “I hit it amazing yesterday. I just stroked it well, too just nothing went in.

“I knew if I just didn’t let that bother me, which I didn’t…I walked off the golf course and thought I really don’t feel like I shot two-over. You have days like that.

“I just took that coming into today and said, ‘OK, if I hit it that good again and just get a few putts to drop, I just have to stay patient.’ That’s what I did. That’s golf for you.”