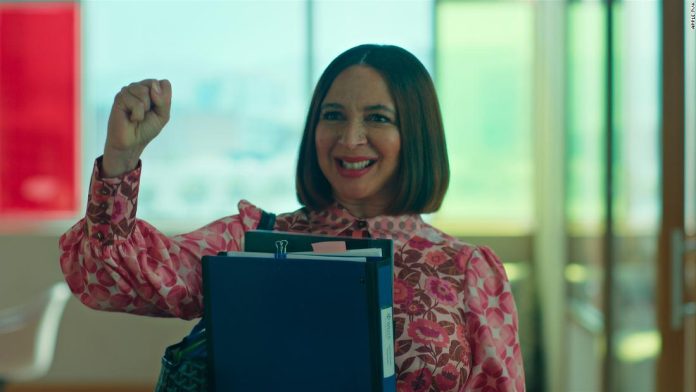 A version of this story appeared in Pop Life Chronicles, CNN’s weekly entertainment newsletter. To get it in your inbox, sign up for free here.
Basically, good vibes all around.
Such happiness deserves some great content, so let’s go.

It feels right to start with Maya Rudolph, since her Bey impersonation in a 2012 episode of “SNL” is legendary.
Starring in a new comedy series, Rudolph plays a woman who lives in rarefied air, thanks to a billionaire husband.
We love shows about the one percent — and her character, Molly Novak, trying to live more like the rest of us and do good with her money after a marital betrayal is a great premise.
The first three episodes of “Loot” start streaming on Apple TV+ Friday.
I was already blown away by Austin Butler’s portrayal of the King of Rock ‘n’ Roll, even before I learned that he sings the young Elvis Presley’s songs himself in the new Baz Luhrmann film.
If you know anything about Lurhmann’s work (think “Moulin Rouge!”), you know it’s usually big, bold and over the top. This musical is no different.
Look for Butler to get nominated during awards season — whether singing or using his speaking voice, he’s convincing as a smoldering Presley. His performance even got the endorsement of Presley’s daughter, Lisa Marie Presley, his granddaughter actor Riley Keough and his former wife, Priscilla Presley.
“Elvis” is in theaters now. (Warner Bros., which produced the film, shares a parent company with CNN.)
‘Gordita Chronicles’
Nostalgia is where it’s at always, but especially during the summer months.
That’s why this comedy series, set in Miami during the 1980s, is right on time.
Cucu “Gordita” Castelli (Olivia Goncalves) moves from Santo Domingo with her Dominican family in search of the American dream. But coming of age as a not exactly svelte young teen immigrant, at a time when the dollar is almighty and thin is in, can be challenging — even when you can make it funny.
The Latina power is strong with this one. Eva Longoria directed the pilot, and she and Zoe Saldana are two of the executive producers for this show.
It’s now streaming on HBO Max, which shares a parent company with CNN.

Luke Combs is “Growin’ Up.”
That’s the title of his new album, and while plenty of people are focusing on his duet track with superstar Miranda Lambert, I’m most digging his soulful ballad “The Kind of Love We Make.”
“‘(The) Kind of Love We Make’ is one of those songs that I wouldn’t have been comfortable cutting when I was 24 or 25,” Combs told Rolling Stone. “But at 32, I feel like I’ve lived a hundred lifetimes in those seven years in a lot of ways because I’ve been all over the world. I’ve like met so many different people and it’s like I’m married. It’s like all these perspectives change. You’re inevitably a different person.”
“Growin’ Up” dropped Friday.
It’s time for Muna to get its due.
After a decade and two albums, the indie pop trio has built up a fan base, but not the commercial success that many believe they deserve.
Katie Gavin, Josette Maskin and Naomi McPherson are queer and have been hailed for not only their music, but also how they are helping to bring more exposure and acceptance to the LGBTQ community.
In a review for Gigwise, David Roskin wrote that the group’s new self-titled album, out Friday, “is the trio’s most vulnerable and impactful entry in their discography yet, continually pushing their sound to untested limits.”
He added, “MUNA is largely pop prowess at its best, dipping its toes into hyperpop, country and reaching out in every direction settling in a genreless, boundary breaking space feeling completely self-assured.”
“Muna” may be the vehicle that finally breaks the band through.

The second half of season nine of the reality series “Chrisley Knows Best” starts on USA Network this week, and knowing what we know now, it might be a bit weird watching the family.
The show’s stars, Todd Chrisley and his wife, Julie, were recently found guilty of conspiracy to defraud banks of more than $30 million in loans and along with their accountant, Peter Tarantino, were also convicted of several tax crimes. Julie Chrisley was also found guilty of obstruction of justice and wire fraud.
The season was filmed prior to the convictions, but you best believe that plenty of people will be tuning in, if for no other reason than to hunt for clues of what’s to come.
For their part, the Chrisleys have said it’s a “very sad, heartbreaking time” for their family, and they are leaning on their faith to get them through.
USA Network has not made any announcement about where the show goes from here, and I’m betting that depends on the sentencing, which has been scheduled for October 6.

Reminder that Covid-19 is still around.
“The Big Bang Theory” star and “Jeopardy” host Mayim Bialik recently shared on social media that she had contracted the coronavirus and was having a rough go of it.
“It’s very, very exhausting. … The exhaustion is very special,” she said. “I had mononucleosis when I was in college and … the exhaustion hits like that where you cannot be awake, you can try to be awake but then all of a sudden you need to sleep.”
Bialik also said that she has asthma and a thyroid condition, “which means it’s an immune compromised situation.” She also expressed regret at having let her guard down when it came to masking.
“I’m feeling a lot of fear. Why did I ever go out? Why did I think that anything was fine ever?” she said.
It’s a good reminder for all of us that while things are better, we are not in the clear yet in the ongoing pandemic.