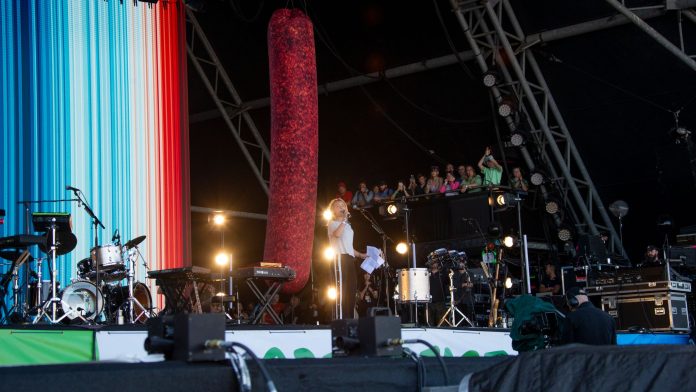 Greta Thunberg has urged society to take on its “historic responsibility” to tackle the global climate crisis during an appearance at Glastonbury.

Delivering a speech from the festival’s Pyramid Stage, the environmental activist gave the crowd a stark warning that the world is facing a “climate and ecological emergency”.

“The biosphere is not just changing, it is destabilising, it is breaking down,” the 19-year-old said, before stressing that the “consequences could be catastrophic”.

“And no, unfortunately, this is not the new normal,” she added.

“This crisis will continue to get worse until we manage to hold the constant destruction of our life-supporting systems, until we prioritise people and planet over profit and greed,” she added.

Placing blame on global leaders, Ms Thunberg they have “actively created loopholes” and society has come to “expect” them to lie.

“We should be fighting for people and for nature, but instead we are fighting against those who are set on destroying it,” she urged.

“Today our political leaders are allowed to say one thing and do the exact opposite. They can claim to be climate leaders, while at the same time expand their nation’s fossil fuel infrastructure.”

‘Together we can do the seemingly impossible’

However, the campaigner went on to say that there is still time for the world to choose a “sustainable” path that “leads to a future for everyone”.

Addressing the thousands of festival-goers in the crowd, Ms Thunberg said: “You and I have been given the historic responsibility to set things right.

“Together we can do the seemingly impossible. But make no mistake, no-one else is going to do this for us. This is up to us here and now. You and me.”

Read more:
Kalush Orchestra perform first UK gig at Glastonbury
It once cost £1 to get into Glastonbury – but now fans are feeling the effects of spending squeeze

Following her speech, Erin Rudkin, a 32-year-old from Manchester, said you could tell the Glastonbury audience was captivated by the speech as you could “hear a pin drop” in the crowd.

Ms Thunberg’s address was followed by a set by pop-rock band Haim, with Noel Gallagher’s High Flying Birds taking to the stage after them.

The former Beatle’s headline show will come exactly a week after he celebrated his 80th birthday and after more than 60 years of making music.