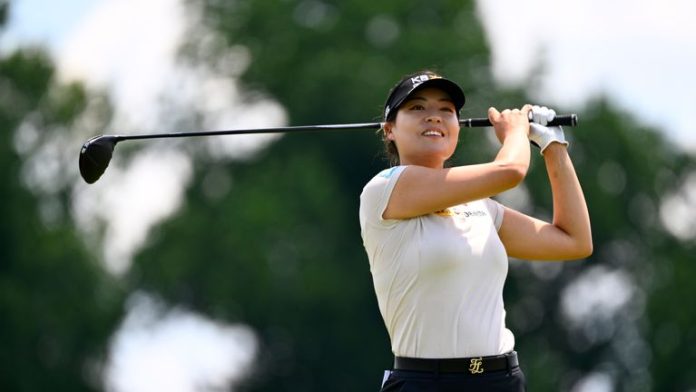 In Gee Chun remains in control of the Women’s PGA Championship despite shooting a three-over-par 75 in her second round; Sei Young Kim, Hye-jin Choi and Lexi Thompson sit three shots back

In Gee Chun saw her lead halved at the Women’s PGA Championship but the South Korean is still very much in charge at Congressional Country Club.

Two-time major winner Chun heads into Sunday sitting three shots clear at eight-under-par. A trio containing two of her compatriots, Sei Young Kim and Hye-jin Choi, as well as American Lexi Thompson are five-under ahead of the final round.

Saturday saw the first time Chun has moved backwards, after the 27-year-old broke the course record with an eight-under-par first round, giving her the biggest lead ever held after day one of a major and had a six-shot lead after the second round.

On a day when Congressional Country Club gave the leaders plenty of trouble, Chun was holding her own until she made a double bogey on the par-5 16th hole.

Chun bogeyed the first and 11th but birdied holes two and 12. She had a five-shot lead when she had to play her third shot from some tall grass on the 16th. That shot put her in even more trouble, in an area with tall grass and some thick trees. She took an unplayable lie and went back to the previous spot to re-hit.

Lydia Ko (76) and Jennifer Kupcho (74), Chun’s playing partners, had their own problems, but Lexi Thompson and Hye-Jin Choi both shot 70 and were tied for second with Sei Young Kim (71) at five-under.

Chun hit an 8-iron and sent the ball over the green, but she did manage to get up and down for just the double-bogey. Ko wasn’t able to take advantage of Chun’s mishap. She bogeyed four of five holes during one stretch on the front nine, then birdied four of the next seven. She wrapped up the round with four straight bogeys.

Kupcho had three birdies and three bogeys in the first seven holes and couldn’t gain much ground on the leader.

Kim had a comparatively drama-free round with two birdies and a bogey. Thompson made three birdies on the back nine, including a putt from about 30 feet on hole 15.