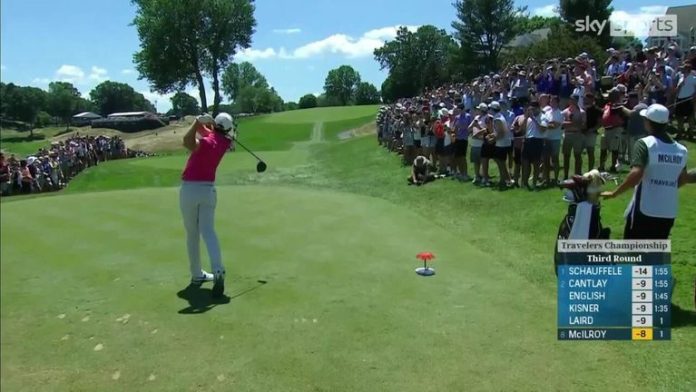 Schauffele leads by a single shot heading into the final day of the Travelers Championship in Connecticut; McIlroy is now 11 shots off the lead after another difficult day at TPC River Highlands

Xander Schauffele has retained his lead at the Travelers Championship but is down to just a single shot heading into Sunday, while Rory McIlroy fell further back after another difficult round.

Patrick Cantlay is the man perched just behind Schauffele on the leaderboard at TPC River Highlands, shooting the best round of the day with a 63.

It means Schauffele’s lead has shrunk from five shots to just one, setting up a thrilling Sunday. He is 17-under after the third round, and went bogey-free until the 13th hole on Saturday, where he found the water.

He responded with a birdie on 16 and then both men carded birdies on the 17th, to keep them clear of Sahith Theegala, who sits third on 14-under-par, after shooting a 64.

McIlroy was the joint-leader after the first 18 holes but his challenge has derailed massively after his aberration on hole 12 on Friday where an incredible sequence of shots saw him give four strokes back to the course.

McIlroy had another nightmare hole on Saturday, the second. His tee shot on the reachable par four hit a tree to land in thick rough barely past the tee box, which the world No 2 would need two attempts to get out of and eventually carded a double bogey-six.

McIlroy then bogeyed the fifth, and while he would make gains at the sixth, ninth and 13th, further dropped shots at the 14th and 16th saw him card a two-over-par round of 72 and leave him in a tie for 31st on six under par.

There was better news for another Brit though, Scotland’s Martin Laird was four-under for his round, to sit tied fifth and five shots back from Schauffele. Kevin Kisner is one shot in front of him at 13-under.

World No 1 Scottie Scheffler also had an impressive Saturday with a round of 65 to move up to 10-under. He’s seven shots off the pace, but another charge on Sunday could put him in contention depending on what happens with the leaders.