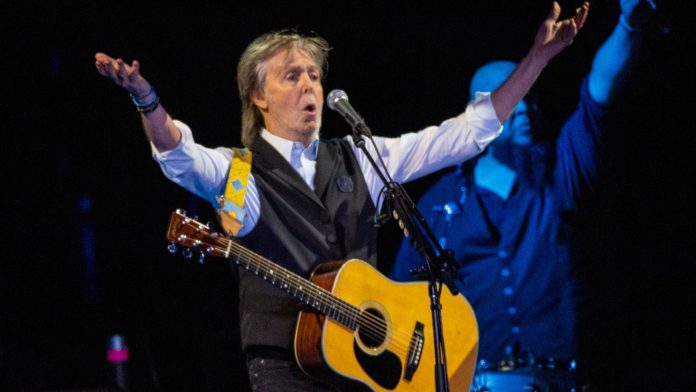 Speaking ahead of his Saturday night Acoustic Stage performance, Scott told Sky News that when he came face to face with his hero, he said, “Hello Dave,” adding: “it was a bit cheeky of me”.

He went on: “I remember he was recommending that I listen to The Pixies, which was his favourite band at the time.

“I felt I knew him you see, I felt so familiar with him.

“He was cool. I wish I’d met him after one of my shows when he came to see us play.

“He came to see us play in New York in a theatre just after 9/11. And someone told me just before the concert started, ‘David Bowie is sitting at the table just in the balcony there’… The first few songs I was suddenly thinking about a lot.”

Inspired by Bowie, as well as Bob Dylan and the Beatles, Scott said the artists impressed him with their capacity to transform:

He said: “[Bowie] changed from Ziggy Stardust, which is rock and roll to young Americans, which was soul music and then changing again when he did the Berlin records.

“I loved the fact that he would change so dramatically… and Dylan in the sixties and the Beatles, of course, because the Beatles revolution was spectacular.”

It is an ability The Waterboys have developed too, as they’ve performed over the years. It’s the 12th year at Worthy Farm for Scott’s Scottish-Irish rock and soul band, and 15th performance (one year he said they performed three shows, another two).

However, Scott admitted he only met festival founder Michael Eavis “about half an hour ago”, adding: “But what a lovely man. And I respect him so much for keeping Glastonbury intact, not turning it into something corporate, not losing the soul of the event.”

Scott said the festival – which attracts in the region of 200,000 people each year – has achieved the seemingly impossible.

“They kept the original spirit of the festival. I remember in 1984, my first visit, it was very small, alternative, lawless and magical,” he said.

“It still has that, even though it’s huge, they found a way to let it grow while keeping the original spirit intact. That’s an amazing thing.”

Two years particularly stand out in his mind: “I remember our 1986 performance. That was a powerful one for us. We were the up-and-coming band, and that was a great moment when we played at tea-time I think the first day, the Friday, and it was really incendiary show….

“But the best time I had at the festival was my first festival in 1984, when I stayed up all night and hung out, and did all the things that the audience do.”

An added bonus that year – finding one of the festival’s fabled secret venues.

“We were wandering around about 3am in the morning and we found a strange farmhouse that was full of people with an open bar and music playing… I’ve looked for it and never found it again.

“It was like Brigadoon, the magical village that only appears once every hundred years. I’ve never found it again. I can’t even find it in the map.”

In 2007 Scott experienced a rainy Glastonbury, describing the “ocean of gloop” they had to contend with.

He went on: “It was a mud bath. Everybody had to buy Wellington boots on the way. We were in London just before, and I remember there wasn’t a Wellington boot to be had in London because everyone involved (wanted them) for Glastonbury. Isn’t that funny? Somehow we got some.”

He said that was the year Shirley Bassey, who was playing the Legend slot, wore diamond encrusted Wellington boots to keep out the slop.

Despite being such a fan of Glastonbury’s back to basics ethos, Scott doesn’t camp during his visits, preferring instead to stay in a hotel in Bristol.

“Camping is not me. No,” he admitted, then conceding: “I could have done the glamping, because they do have these nice tents with proper beds. And I could do that.

“I like some sparkling water, some honey from literally some fruit. And I always ask for a pint of whole milk. There’s a reason for that – it’s so I could put it in my muesli tomorrow morning in my hotel.”

As the home of Glastonbury, Worthy Farm, Pilton Somerset is a dairy farm, that should be a simple request to satisfy.

After two enforced fallow years due to the COVID-19 pandemic, the band is releasing a new single inspired by the festival Glastonbury Fayre

Co-written by band leader Scott and multi-instrumentalist brother Paul, the track is a love letter to Glastonbury, documenting the band’s first ever performance in 1984 and every visit since in a series of funny and revealing verses that namecheck Radiohead, Billy Bragg, Courtney Barnett and Glastonbury Tor.

Scott said his young daughter, who aspires to perform, is “proud” of him, and he hopes to bring her along to the festival next year.

But away from Glastonbury, how have The Waterboys evolved, and more importantly survived, in the fickle world of commercial music?

Scott chose The Waterboys as his band’s name from a line in the Lou Reed song The Kids on the album Berlin.

He explained: “I loved the word Waterboys. I didn’t know what it meant. I know now, of course, it’s the guy that brings the water to the chain gang or the sports players. And it’s an everyday word in America, but not here in the UK.”

As for their hit song The Whole Of The Moon, he said rumours it was about author CS Lewis or late artist Prince are not exactly right.

He said: “It was not really either of them. It’s a kind of character that suddenly appears the shooting star, like a Jimi Hendrix character, and burns so quickly. Or maybe a Syd Barrett, the lead singer of the Pink Floyd, who we saw too much and burnt out.”

The song got to number 26 in the charts in 1985 and number three in 1991 – a second chance after DJs had been playing it on the Balearic Islands.

He said the song’s second success made him happy, as well as earning royalties when its newfound success led to increased radio play.

Another of the band’s hits – 1988’s Fisherman’s Blues – marked a new direction in the Waterboys’ sound as it saw them switching from their earlier grandiose “big music” material to a more scaled down Celtic folk sound.

He said it was his interest in old country music, gospel music and acoustic music that led him to turn away from the so-called “big music” which he said is the product of “lots of overdubs in the studio” and “very difficult to reproduce in concert”.

It was then he decided to “strip it down”, developing a more “rock and roll sound” for the band. He said they have since developed “a more funky” sound.

The Waterboys will be appearing at various festivals around the UK over the summer, and their new album All Souls Hill is out now.

‘A force of nature’: Friends, co-stars and fans pay tribute to Olivia Newton-John