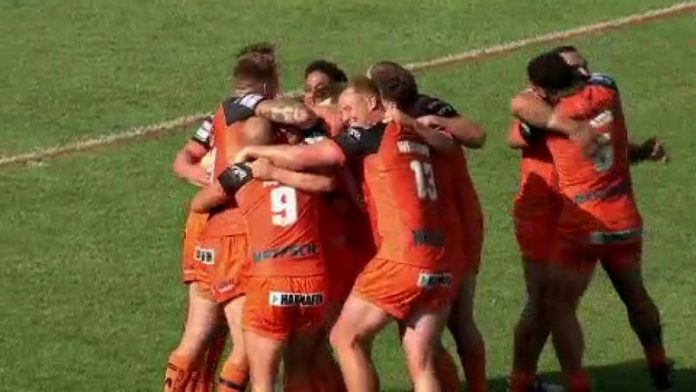 Castleford move up to sixth in table after Danny Richardson drop goal in extra time; half-back had earlier converted Darrell Olpherts’ try to level the match

The scores were locked for much of the first half at the Mend-A-Hose Jungle, but Cheyse Blair opened the scoring for the hosts before Michael McIlorum equalised nine minutes after.

The game burst into life in the second half when Ryan Hampshire gave the Tigers the lead again straight after half-time, but Sam Tomkins pulled the visitors level once more before they went ahead soon after through Arthur Romano.

However, Derrell Olpherts’ corner try then drew the sides level for a third time in the match.

In golden-point extra-time both sides missed opportunities in the first period, but Richardson’s drop goal in the second half earned two points for the hosts.

Castleford had weathered an early storm but also posed a threat themselves. After five tackles and some quick passing, Kenny Edwards was dragged into touch after trying to bundle himself over the whitewash.

The hosts finally had the opening try of the game in the 27th minute when Jake Trueman threaded a neat grubber kick into the path of the onrushing Blair, who quickly gathered and touched down before Richardson added the extras to make it 6-0.

Catalans came forward in search of a quick response and got their opening score of the contest in the 36th minute after Tomkins’ 40-20 put the visitors forward. McIlorum nudged the ball over the line from dummy half and Tomkins added the extras.

Castleford came firing out of the traps in the second period and hit the lead once again in the 42nd minute after a penalty fell in their favour.

Hampshire cleverly weaved his way through the Dragons defence before touching down in the corner, but Richardson’s missed conversion made sure the scores stood at 10-6.

In similar fashion to the first period, the Dragons fired back quickly, some neat footwork from Tomkins opening up a gap. He made no mistake in touching down but missed his own conversion to leave the scores level at 10-10.

Catalans hit the front 20 minutes into the second half after Joe Chan made a defence-splitting run before being held up just before the line. Romano forced over from dummy half and Tomkins’ conversion made it 16-10 to the visiting side.

In a game which swung one way then another, it was Castleford’s turn to respond when Olpherts barged over in the corner in the 65th minute and Richardson’s conversion made it all-square yet again.

Catalans could have nicked it in the dying stages when Chan went through, but a succession of errors led to McIlorum diving in under the posts, only for the ball to be ruled to have gone forward.

With the game in golden-point extra-time, both sides missed opportunities to take the points.

First the hosts did so through Trueman, before Tomkins shanked wide of the target, but Richardson’s drop goal in the second half snatched all the points for the home side.