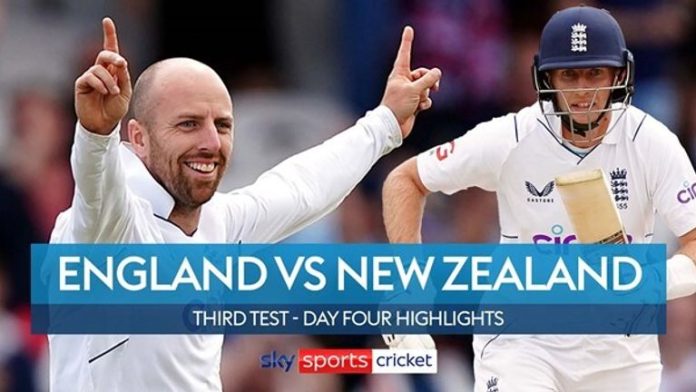 “It is special to be a part of”; Jack Leach praised the environment being created by Ben Stokes and Brendon McCullum after taking 10 wickets at Headingley; The third Test comes to a close on Monday, from 10.15am on Sky Sports Cricket

Nasser Hussain admitted he was “wrong” to judge England’s new brand of cricket with England fans appreciating the entertaining style that new coach Brendon McCullum and skipper Ben Stokes have instilled into the Test side.

After a turbulent few years, the new regime of McCullum and Stokes has been one that has preached positive and attacking cricket, once again coming to fruition on day four at Headingley with Jack Leach (5-66) taking his second five-wicket haul before Ollie Pope (81no) took control with the bat in the evening session.

While originally maintaining scepticism about the new brand of English Test cricket, Hussain conceded that he had been wrong about England fans being solely focused on getting a winning result.

“I was the first to pull Keysy (Rob Key) up on it when he said we are going to play in a different style and a different brand and I said these fans just want a winning brand and a winning style and I got it wrong,” said Hussain.

“These fans want to see this style of cricket and winning is a bonus if they go 3-0 up and win all three like this.

“But what we are seeing from these fans, they are loving what they are seeing out in the middle.

“The brand and style of cricket is important.”

Coming into the series, Pope was under pressure taking up the number three spot in the batting order but has proven his worth and heads into the morning session on day five with his third Test hundred in his sights.

For Sky Sports’ Simon Doull, new Test coach McCullum’s attitude will have been a vital component in giving the Surrey batsman the confidence to attack on the international stage in the same way he does at county level.

“I just think he has a bit more confidence,” added Doull.

“We talk about that 100 at Nottingham, he exudes confidence at the county level, he struts like a few other Surrey players who have gone before him.

“He struts at the county level and he bullies and bosses it but he hasn’t quite found that on the international level.

“It is not about ability, it is all around attitude and belief and knowing that he is not going to be dropped if he has a couple of failures.

“I just know that Brendon McCullum will be saying those types of things to these types of players – don’t worry about getting dropped next week, or next month or the month after that.

“That is not what this is about, if you can’t enjoy what is happening right here, right now.”

The praise for England’s new style of play came from within the dressing room too, spin bowler Leach revealing that it is Stokes’ confidence in his players that is giving everyone the freedom to play in such an attacking way.

“The way we batted there was unbelievable and a great day.

“It was very special here at Headingley, I had good memories from 2019 and first game back here and I enjoyed it.

“I want to be contributing to wins so I am really enjoying working with Stokesy.

“So I say what about mid-on back and he says nope.

“It is really attacking and I am enjoying bowling like that as well.

“[Under Stokes] it’s really attacking and I am really enjoying bowling attackingly.

“Stokesy’s confidence in his decisions but also us as players – I have never experienced anything like it. It is very special to be a part of and that is credit to Stokesy and Baz (Test coach Brendon McCullum) for setting that up.”

Watch day five of the third LV= Insurance Test between England and New Zealand, at Headingley, live on Sky Sports Cricket with coverage starting at 10.15am and play getting underway at 11am, on Monday.