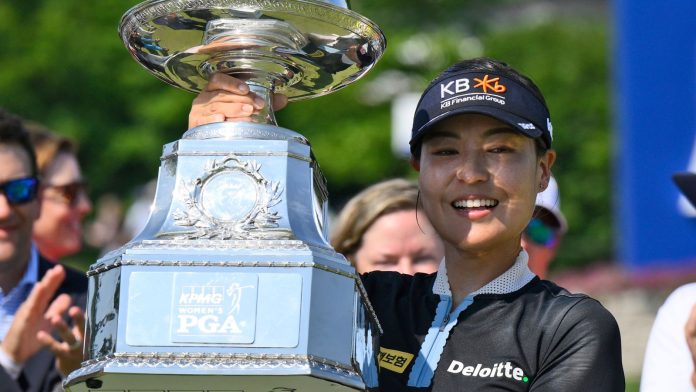 In Gee Chun finished with a closing round of 75 and her final 36-hole closing total was the highest of a winner on the LPGA Tour since 1998; Lexi Thompson had been two-shots clear before her nightmare finish at the Congressional Country Club

In Gee Chun claimed a one-shot victory at the Women’s PGA Championship at Congressional Country Club after Lexi Thompson bogeyed two of her final three holes.

Chun went into the final round three shots clear of the field, but in windy conditions hit four bogeys on the front nine and allowed the chasers, which included Thompson to come back at her.

Thompson then pressed two ahead before Chun capitalised with a birdie on the 16th as the American dropped a shot.

Thompson would bogey the 17th as well and could only par the last as Chun secured two more pars – which finished with a clutch five-foot putt on the 18th green – to complete a final round of 75 and secured her third major title.

Chun started her competition at Congressional Country Club by breaking the course record and equalling the lowest opening round in Women’s PGA Championship history.

She then followed her eight-under-par 64 with further rounds of 69, 75 and a final 75 on Sunday to secure the title.

“It means a lot [to win] because I didn’t have any victories for almost three-and-a-half years,” Chun said after lifting the trophy. “So, I really appreciate all of my sponsors because they always believed in me.

“My family, coach, managers and my caddy and my fans in Korea, they all never gave up on me no matter how I did. Thank you so much.”

Sky Sports pundit Dame Laura Davies said: “Lexi had it in her grasp, the chip on 16 changed the whole day. If she birdies the hole, she’s cruising to victory.

“But fair play to In Gee, even though she wasn’t having the day she wanted, she stuck in there in case anything happened, and sure enough it did happen and she was there.

“That two putt at the last was fantastic.”

For Thompson, it’s another finale to a competition that will keep her up at night. At the US Open last year, Thompson held an eight-shot lead with five holes to play and yet didn’t make it into the play-off.

At the Congressional Country Club, the American had enjoyed a two-shot outright lead, before struggling with her short game. A wayward chip on the 16th in particular seemed to scramble her mindset and put her off course.

“We know that last year she didn’t want to do interviews and that’s very understandable,” Davies said. “Today, she took it like a champion to be honest with you, and that’s a very hard thing to do.

“When you feel like it was yours and you’ve not won it, it’s so difficult to smile and do all of the congratulations on the 18th green. Huge plaudits because she’s taken yet another big blow very well.

“How this will affect her in her next major? Maybe she’ll break the duck there and get another major under her belt because this one definitely got away.”