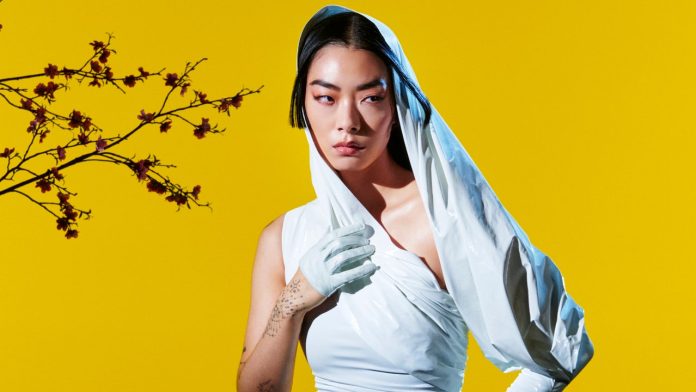 Rina Sawayama has released the latest single from her forthcoming second album, Hold the Girl. It’s called “Catch Me in the Air.” Sawayama wrote the song as a tribute to her mother, who raised the pop artist as a single parent. “I really wanted to write about this weird relationship with single parents,” Sawayama said in a press release. “You do catch each other in the air.” Sawayama has also shared a visual for the track, which was created with fan-submitted footage of the singer performing live. Check it out below.

Sawayama wrote “Catch Me in the Air” alongside Oscar Scheller, Gracey, Clarence Clarity, and Stuart Price. The single was written “in between lockdowns,” as Sawayama put it. She continued:

I wanted the whole song to sound like it was on an Irish coastline, like a Corrs video. We put in a key change to go into the chorus, at the end of the pre-chorus to make it lift and soar like a bird. I then worked on it more with Clarence before taking it to Stuart Price. This was the first song that Stuart and I worked on together, and it was the most incredible experience. I’m such a huge fan of his work with Madonna and Kylie so it was a dream come true. We would send each other stock images of coastlines, people doing yoga on a pier, meditating in the middle of a field, hay bales, etc. to get inspired sonically.

In a new interview with Zane Lowe, Sawayama talked about being influenced by Gwen Stefani. “I was like, ‘Why don’t we just pretend to write for Gwen,” she said. “But after that I was like, ‘Ooh, I’m so about pre-chorus key changes at the moment.’ So, I think it was going into the chorus or maybe even going into pre-chorus. But anyway, I was like, ‘Oscar, come up with a key change please.’ And he was racking his brains because doing a key change is really hard… and what’s harder than an obvious key change is a really subtle key change.”

Hold the Girl arrives September 2 via Dirty Hit. Last month, Sawayama announced the album with the release of its lead single “This Hell.” The country-pop cut received an Ali Kurr-directed music video shortly after, starring Sawayama and a troupe of hoedown dancers. Hold the Girl follows Sawayama’s 2020 self-titled debut.