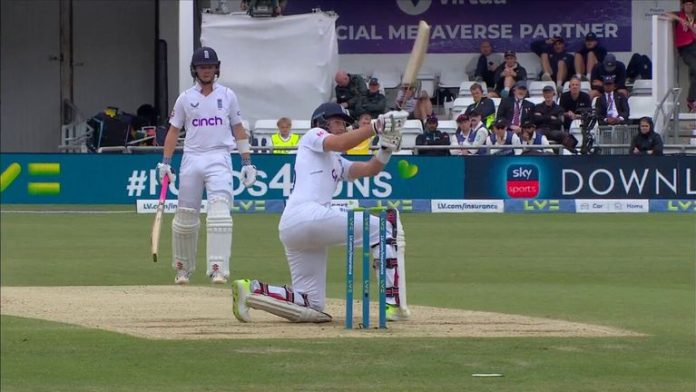 Joe Root and Jonny Bairstow get top marks but how did the rest score after a thrilling series win over New Zealand? Watch the rescheduled fifth Test vs India from 9.30am, Friday – play starts at 10.30am – on Sky Sports Cricket

The era of ‘Bazball’ is here – and England are a team transformed! It’s been a perfect start under the new regime with world Test champions New Zealand swept 3-0 but how did Brendon McCullum’s charges fare individually?

The Durham left-hander has looked a different player to the one who made his Test debut in the Caribbean earlier in the year. Since the second innings at Lord’s, he has batted positively and has begun to look increasingly comfortable at this level. He got England off to a flyer in the chase at Trent Bridge and registered his maiden fifty but he will be after a big score soon to really cement his place. A jaffa from Trent Boult and disappointing run out meant it was a quiet end to the series.

McCullum described Crawley as a “rare talent” at the end of the Headingley Test and looks set to keep his place for the Test against India but the Kent opener needs to start turning that talent into runs soon after another disappointing series. All the shots are there but choosing when to play them remains an issue, with his eagerness to drive proving to be a real problem area of late.

Recalled to the side and bumped up to No 3, Pope has responded well to the challenge handed him by McCullum and Ben Stokes. After an iffy start at Lord’s, he scored a wonderful century in the first innings at Trent Bridge and, while he fell short of a third Test hundred, his second-innings knock of 82 at Leeds was perhaps even more impressive. A highly encouraging start to life in his new position for England’s brightest batting talent since Joe Root.

What more can you say? Having relinquished the captaincy, Root’s role in the side has been simplified to scoring runs – and he continues to do so at a staggering rate. A century at Lord’s, his first in the fourth innings of a Test match, got the new era off to a winning start, another followed in Nottingham and had Bairstow not been in such a rush on day five at Headingley, there is every chance he would have notched a third. A sublime player in sublime form.

In the space of a couple of weeks, Bairstow played two of the most remarkable innings you could wish to see. What happened at Trent Bridge was just staggering. England were meant to be up against it going into the last session of the match, with 160 more needed to win. Instead, they were celebrating 16 overs later after Bairstow’s brutal onslaught – seven sixes, a century from just 77 balls and eventually dismissed for 136 from 92 balls.

On to Headingley, his home ground, and somehow he managed to match it. He walked in with England 17-3, which soon became 55-6, but didn’t blink. No sixes this time but 24 boundaries in a stunning knock of 162 from 157 balls, catapulting England out of a hole with such force that New Zealand fell into it. Not satisfied with that, he bludgeoned England’s second fastest Test fifty to finish the series in style.

Three games into life as England’s Test captain and Stokes looks a natural. Putting aside his batting and bowling for a moment, he has barely put a foot wrong in his captaincy. His plans have been clear, there have been inspired bowling changes and he has not been afraid to switch things up if necessary.

With bat, ball and in the field he has lived up to his word. England have not

shied away from danger, they have attacked it head on. Stokes did his part with the bat, scoring a crucial fifty in the chase at Lord’s and then getting the side over the line with an unbeaten 75 at Trent Bridge. The only minor criticism would be his reluctance to bowl himself at times but with three wins out three, he could rightly argue that he knew best!

Back to his best with the gloves after an unusually sloppy series in the West Indies, Foakes made his mark with the bat as well. Root took the headlines at Lord’s but Foakes was there with him to help get the side to their target and backed up that encouraging knock with a well-made half-century in the second Test – and was there again at the end in the chase. He will hope to recover from the bout of Covid-19 that saw him withdrawn midway through the series finale in time to retake his place against India.

Brought in to debut in the last Test of the series, no one expected that it would be Overton’s batting that most caught the eye. He played brilliantly in an England record 241-run stand for the seventh wicket and fell agonisingly short of the century that those inside Headingley were willing him to reach. With the ball, it was more of a mixed bag with an understandable nervy spell on the first morning before a more solid showing from there on in.

A raft of injuries to England’s seam bowlers gave Potts his chance and it is hard to see what more he could have done across the series. A dream debut at Lord’s saw him claim Kane Williamson as his first Test wicket – and he dismissed him twice more before the series was done – and he has not looked back. The 23-year-old Durham pacer was arguably the pick of the England bowlers in Leeds and the skill, consistency and intelligence with which he bowled across the three matches should be enough to excite fans going forward.

England’s second most prolific wicket-taker of all-time turned 36 during the last Test but is still going strong. The magic, game-altering spells are still there as shown on the fourth day at Lord’s when he dismissed Daryl Mitchell and Kyle Jamieson in the same over, with Colin de Grandhomme run out in between, to bring the hosts back into the game. Broad is now just one shy of 550 Test wickets and showed at Headingley that he remains great value with the bat, too.

Is it possible for someone to be 19 years into their Test career and still getting better? With 651 Test scalps and counting, Anderson is doing everything he can to prove just that. A master of his craft, he got the series off to a flyer with a fabulous new-ball burst and ends the series with the best average of any bowler involved. A minor ankle injury ruled him out in Leeds, a gentle reminder that he can’t go on forever. He will be 40 before the summer is out – enjoy him while you can!

Concussed early in the first Test and largely ineffectual in the second, Leach came to the party in Leeds, on a ground with which he will always be intrinsically linked. A wicket with his first ball after being given an early bowl will have done wonders for him, as will the confidence of his captain, who gave him 30 overs on day one. He was rewarded with a first home five-for and backed it up with another in the second innings to claim a maiden 10-wicket match haul in Tests. After a tough couple of years, Leach and England will hope this is the start of a more productive period for him.

Drafted in as a concussion sub for Leach, the Lancashire leg-spinner had little time to prepare for his Test debut but acquitted himself well without wowing. New Zealand were keen to try and get after him but he held his nerve on pitch offering precious little for the spinners. A first Test wicket under his belt, Leach’s wickets this week might mean he has to wait a while for the next one but Parkinson did well enough to keep himself in contention as and when England are looking at their other spin options.

Called up as a Covid-19 replacement for Foakes at Headingley, it was a whistle-stop visit for Billings. He kept wicket for a couple of session and wasn’t required with the bat.

Watch day one of the rescheduled fifth LV= Insurance Test between England and India, at Edgbaston, live on Sky Sports Cricket with coverage starting at 9.30am and play getting under way at 10.30am, on Friday.