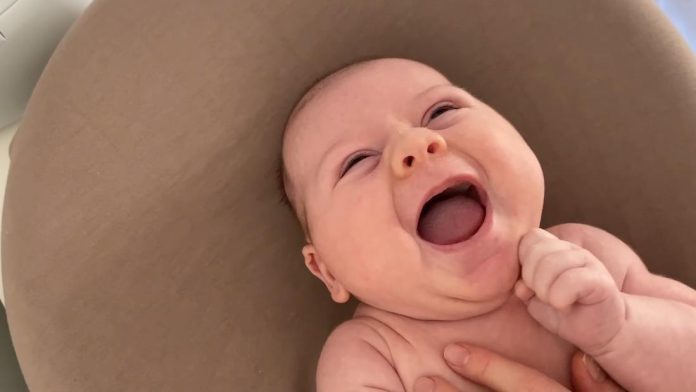 “I had never thought about donating milk,” she said. “I never knew anyone that donated milk before.”
Fink isn’t shy about sharing intimate moments with her online audience. That includes when her son, Milo, was born last November. She shared everything from the delivery process to her postpartum life. But when it came to feeding Milo, Fink admits that pumping breast milk was a big mystery to her.
“People don’t tend to share a lot of behind the scenes about pumping,” she said.
So, Fink shared her journey by recording a series of “Pump with Me” videos.
“That was something I had never seen before. And my audience has found it fascinating.”
Fink said the excess milk began to pile up in her freezer.
“All I knew was that my body was producing more milk than my son currently drank in a day,” she said.
Fink’s followers encouraged her to not waste the milk and donate it instead. She said at the time, she didn’t realize she could donate breast milk. She started the process by Googling, “How to donate my breast milk.”
After finding the New York Milk Bank, she went through a phone screening, online application and blood test. Fink also needed to give permission for the milk bank to access her and Milo’s medical records.
While Fink started donating her excess milk before the formula shortage, she says that with the current situation, it’s needed more than ever.
“It’s important to recognize that the milk sitting in your freezer is better served going to a child that’s in need right now, especially those really young babies in the NICU that are compromised because of their size and age,” she said.
The response to her donations has been “overwhelmingly positive and powerful,” Fink said, and she hopes that sharing this part of her journey inspires others to do the same.
“The process was really very easy and simple, because it does sound kind of daunting.”
She also has a message for mothers struggling to feed their young children right now.
“If you are impacted by the formula shortage, there are people and ways to connect to these people who have … an answer to your problem. … There is help in your community.”