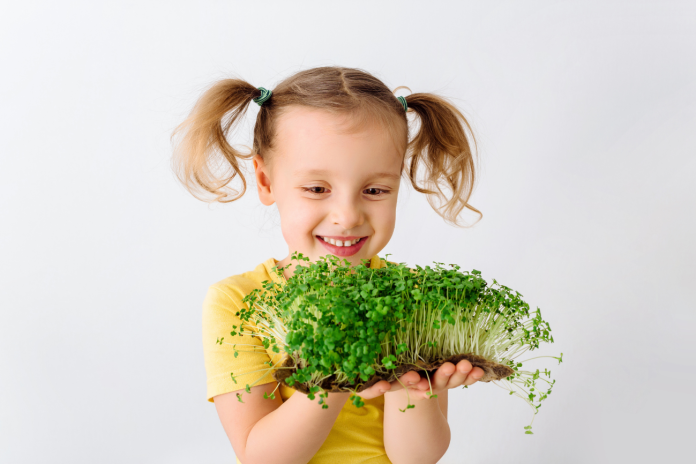 Sometimes called “vegetable confetti” thanks to their vibrant shades of green, red and purple, microgreens have taken the culinary world by storm. Available in upscale grocers and restaurants, they can add texture and sweet or spicy flavor to soups, salads and sandwiches. And on the social media app TikTok, amateur and professional growers alike have documented their love for the miniature greens in nearly 105 million videos. But make no mistake — microgreens aren’t coveted merely for their color or taste.

Unlike sprouts, which are often eaten before their leaves develop, microgreens are the seedlings of various vegetables and herbs. In other words, if sprouts are at the infant stage of plant growth, microgreens might be considered toddlers. These toddlers are typically harvested within two weeks of germination, when they’re only a few inches tall. Despite their small size, however, many serve up a macro portion of nutrients.

The first ever analysis of more than two dozen varieties of microgreens in 2012 found that some contain nutrient levels up to 40 times that of their fully grown counterparts. For the roughly nine in 10 U.S. adults who don’t consume sufficient amounts of veggies — around 2½ cups per day, according to the Dietary Guidelines for Americans — microgreens could be a welcome addition to an otherwise lackluster menu. And because the seedlings can be grown without land or even a greenhouse, regardless of season, urbanites in particular could benefit the most.

Here are some of the benefits you can expect when incorporating microgreens into your own diet.

A 2020 study published in the Journal of Food Composition and Analysis found that microgreens are rich sources of the antioxidants vitamin C and vitamin E — used by your body to support the immune system and promote healing, among other things.

Vitamin C-rich microgreens include red cabbage, garnet amaranth and spinach, although nearly all varieties boast greater concentrations than their fully grown counterparts. Spinach microgreens in particular can contain more than double the vitamin C content found in the mature plant; that’s a level comparable to those found in citrus fruits, well known for being abundant sources of the vitamin, write the authors.

The spinach greens also contained eight times more vitamin E content than mature leaves, according to data from the USDA National Nutrient Database. Other vitamin E-rich microgreens from the study include cilantro, fennel, radish and sunflower.

Beta-carotene, best known as the precursor of vitamin A, is critical for vision and development. The potent antioxidant is typically found in yellow or orange fruits and veggies like carrots, as well as green, leafy veggies.

According to a 2018 review published in the Journal of Agricultural and Food Chemistry, most microgreens are an excellent source of beta-carotene, although wide ranges of the antioxidant can be found. Out of 25 different veggie varieties considered in the study, red sorrel and cilantro microgreens contained the highest and second highest concentrations respectively — although red cabbage contained approximately 260-fold more than what is found in mature cabbage. Other excellent options include fennel and radish.

Recent studies suggest that microgreens are also rich in minerals. A 2017 study published in Frontiers in Nutrition, for example, reported that broccoli microgreens have just as many or more minerals than its mature counterpart, including phosphorus, potassium, magnesium, manganese, zinc, iron and calcium. Researchers argue that these mineral concentrations are naturally greater during the early stages of leaf development — thereby making microgreens healthier than both sprouts and mature fruits and veggies.

Another benefit to microgreens is that they contain less anti-nutrients, which are often in mature leafy greens and other plant-based foods. These naturally-occurring anti-nutrients can prevent the body from absorbing important minerals like zinc, iron and magnesium. Microgreens and sprouts produce enzymes that break down these anti-nutrients — enabling us to absorb more minerals when we chow down.

The 2020 study published in the Journal of Food Composition and Analysis was the first to evaluate oxalic acid content, one of these unwanted anti-nutrients, in 10 microgreens. Oxalates can become a concern for people with kidney disease or kidney stones because they interfere with calcium absorption in the body. Fortunately, the greens had lower levels of the anti-nutrient compared to full-grown veggies and herbs; radish clocked in with the smallest amount. Spinach microgreens had a 16-fold lower oxalate content than mature spinach leaves.

The 2018 review mentioned above, however, notes that further studies are necessary to “fully realize the value of microgreens in human health.” The authors write that, among other issues, optimal growing conditions and the effects of post-harvest processing on nutritional content have yet to be determined. Perhaps you can do your part by sprinkling some seeds in your window box and keeping track of which ones taste the best in a few weeks.

Destination Dhofar: The tropical side of Oman