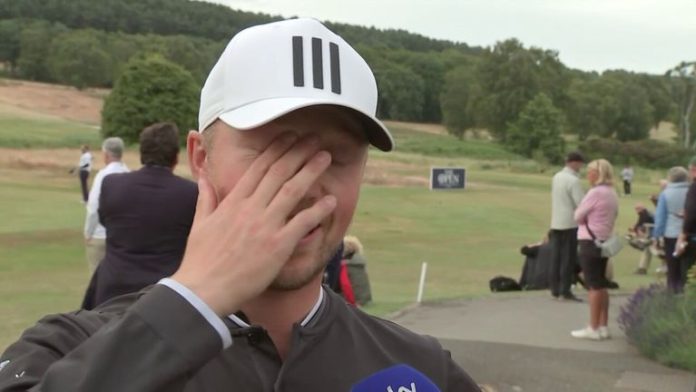 Sixteen players from a starting field of 288 at four venues book spots for golf’s original championship through Final Qualifying, earning places in the field for The 150th Open taking place at the home of golf from July 10-17, live on Sky Sports

Marcus Armitage and Sam Bairstow enjoyed fine performances on Tuesday to book their places in The 150th Open at St Andrews.

Sixteen players from a starting field of 288 at four venues qualified for golf’s original championship through Final Qualifying, earning spots in the field for the historic occasion taking place at the home of golf from July 14-17, live on Sky Sports.

Armitage carded two rounds of 68 to secure his third appearance in The Open, while it was a case of history repeating itself for English amateur Bairstow who earned his place through Final Qualifying at the same venue for the second year running.

They will be joined by Matthew Jordan, who finished one stroke behind on a seven-under-par total of 137, and the fourth qualifying place at St Annes Old Links was determined by a two-way play-off between John Perry and Daniel Kay, who tied for fourth place on six under par. The pair were separated by Parry’s par at the second play-off hole as the Scot could only manage double bogey.

At Hollinwell, amateur Barclay Brown set the early pace after rounds of 68 and 72 gave him the clubhouse lead on a four-under-par total of 140.

An eagle on the par-five third hole got the Great Britain and Ireland international off to a strong start and he picked up two birdies on the 14th and 16th to complete an excellent first round. A steady level-par 72 in the second round ensured the Stanford University student claimed the first qualifying place with no one in the field able to catch him.

Richard Mansell followed a similar path to The Open after earning his place in the Championship through Final Qualifying at Hollinwell for the second year running. Despite an opening one-over-par 73, the Englishman fought back in the second round to card a three-under-par round of 70 for a one-under-par total.

He was joined on the same mark by Oliver Farr and the three-time Challenge Tour winner will tee it up in The Open for the first time along with Marco Penge who finished a shot further back on a level-par total of 144.

In sunny, but windy conditions on the Kent coast, Matthew Ford qualified for The Open to make his major championship debut after he led the qualifiers at Prince’s on a five-under-par total of 139.

The Englishman started off with a steady round of 71 before experiencing a rollercoaster second round in which he mixed two eagles and three birdies with a double bogey and two bogeys.

Nevertheless, a four-under-par 68 led to Ford finishing two shots clear at the top of the leaderboard ahead of compatriot Jamie Rutherford and Irishman Ronan Mullarney, a former R&A Foundation Scholar, who tied for second on three under par. Both players matched each other with rounds of 70 and 71. A play-off decided the final qualifying place as Matthew Southgate’s birdie putt from five feet slipped agonisingly past the hole on the last to leave five players level on two under par. Jack Floyd went on to prevail among the group of hopefuls in sudden death with a birdie at the first play-off hole.

Ireland’s David Carey came out on top at Fairmont St Andrews after he finished ahead of the field on a seven-under-par total of 137. The Dubliner, who visited the Old Course yesterday to take in the surroundings, was inspired to post a bogey-free 69 followed by a 68 which included an eagle and two birdies to clinch a berth in the field for The Open in July when he will make his debut.

Richard Dinwiddie will return to compete in The Open for the first time since Royal Birkdale in 2017. The three-time Challenge Tour winner finished four shots adrift of Carey on a three-under-par total but secured the second qualifying place at the Fife venue.

Holland’s Lars Van Meijel and Alex Wrigley emerged from a three-way play-off against Aaron Rai as the trio competed for the two remaining places after finishing locked together on two-under-par. Two pars were enough against Rai’s bogey 5 as the pair held their nerve to edge out the two-time winner on the DP World Tour and claim the two remaining qualifying places.