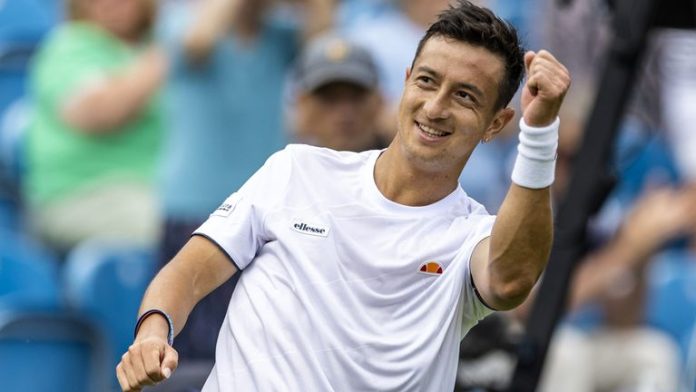 Emma Raducanu, Andy Murray and Novak Djokovic are all in action on Centre Court, while there is further British interest elsewhere as Cam Norrie, Harriet Dart, Heather Watson and Ryan Peniston all play on Wednesday at Wimbledon

Emma Raducanu and Andy Murray are both back in action on Centre Court at Wimbledon on Wednesday, leading the British charge with their respective second-round matches at the All England Club.

Raducanu says she is hoping to rediscover her grand slam efficiency at Wimbledon this year. The US Open champion did not drop a set through her first 10 matches in slams, culminating in her famous run to the title at Flushing Meadows.

Since then, though, Raducanu has found herself dragged into a number of long matches, and her opening-round victory over Alison Van Uytvanck on Monday was her first two-set triumph at a slam since beating Leylah Fernandez in that US Open final.

With her history of injury niggles and recent recovery from a side strain, avoiding staying on court too long could be crucial to Raducanu’s hopes of a good run at Wimbledon this year, so she is hoping for more of the same against France’s world No 55 Caroline Garcia in the second round.

“I think that it helps at slams that you get a day off in between, so I think that is pretty valuable,” Raducanu said.

“There were some tough moments in the second set [against Van Uytvanck], physically, but I told myself, ‘Push through, if you win in two sets, then you don’t have to play three’. That’s the tactic.”

Garcia is in good form, having won a title in Germany at the weekend, but she needed a final-set tie-break to defeat British wild card Yuriko Miyazaki on Monday.

“Caroline is a great opponent,” said Raducanu, who got the better of her opponent in three sets in their only prior meeting.

“I played her earlier on in the year in Indian Wells and it was a tricky match. She plays pretty fast tennis. I’m ready for that.”

Raducanu and Garcia are second up on Centre Court on Wednesday, with their clash following on from men’s world No 1 Novak Djokovic’s meeting with Thanasi Kokkinakis.

Murray not looking beyond second round

Murray wraps up the action on Centre Court, as he did on Monday, but the two-time champion and three-time grand slam winner insists he isn’t setting any targets at Wimbledon this year.

Murray defeated Australia’s James Duckworth in four sets late on Monday night, but has not reached the second week at Wimbledon in five years and has the big-serving American John Isner standing in his way of matching last year’s run to round three.

In 2017, Murray’s title defence was ended by Sam Querrey in the quarter-finals, when the hip injury that almost ended his career was beginning to take hold.

“Certainly I’m in a better place than I was last year when I played here,” said the 35-year-old.

“In terms of pain, I’m certainly in a better place than I was in 2017 when I played here.

“But, yeah, I don’t know about having a deep run or not. I’ve got a pretty tricky match in the next round against Isner. I’ll need to be on it for that one if I want to get through it.”

Murray’s record against the world No 20 Isner, eight wins in eight meetings, means he should have nothing to fear on Wednesday, other than another late-night finish on Centre Court.

“I played well against John in the past. I don’t think I’ve ever played him on grass before, so there will be different challenges,” he added.

“He’s played well here before. He was very close to making the final a few years ago. I’ll need to play really well and certainly return a bit better than I did on Monday if I want to get through that.”

Who else is in action on Wednesday?

British interest continues over on Court One on Wednesday, with men’s number one Cam Norrie facing Spain’s world No 75 Jaume Munar, while Heather Watson follows up her impressive showing in finishing off Tamara Korpatsch on Tuesday with a second-round clash with China’s Wang Qiang last on Court Two.

Ryan Peniston will see if he can continue his remarkable recent form when facing American Steve Johnson first up on Court Three. Harriet Dart, meanwhile, finally gets her 2022 Wimbledon campaign up and running, with her first-round match against Spain’s Rebeka Masarova having been pushed back to Wednesday.