Home Sport Raducanu knocked out of Wimbledon by classy Garcia 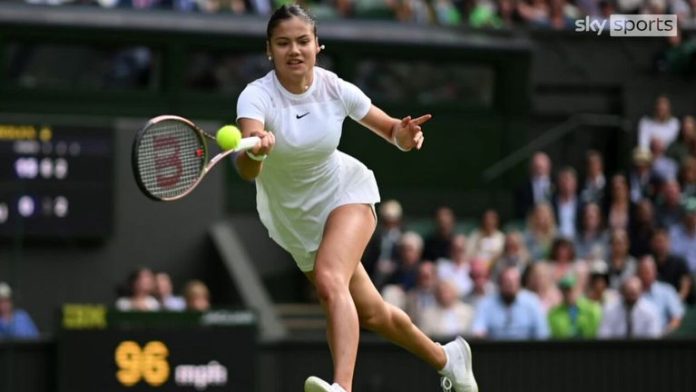 Emma Raducanu’s bid for a maiden Wimbledon title ended when the US Open champion suffered a second-round defeat by unseeded Frenchwoman Caroline Garcia; Harriet Dart becomes the 10th British player to make it through to the second round with an impressive win

Emma Raducanu’s Wimbledon return proved to be an anti-climax as the US Open champion exited in the second round with a straight-sets defeat by Caroline Garcia.

Living up to the hype has proved impossible for the 19-year-old so far and, a year after rocketing to stardom with a run to the fourth round and then achieving the unthinkable in New York, she slipped to a meek 6-3 6-3 loss on Centre Court.

Short of matches after three weeks out with a side strain, Raducanu was simply unable to find the level required to match Frenchwoman Garcia across the 86-minute contest.

Expectations for a Grand Slam champion are inescapable and hopes for her second-round match were boosted by Raducanu having won her only previous clash against Garcia at Indian Wells in March.

Garcia, who arrived late from Germany, where she won a tournament on grass at the weekend, had promised to be aggressive and she was as good as her word, stepping into the court on Raducanu’s second serve in particular and looking to take control with her backhand.

With blustery conditions causing problems for both players, Raducanu battled back from losing the opening two games, but was outhit by Garcia as the 28-year-old reeled off three games in a row.

A clever second serve from Raducanu saved a set point at 2-5 but Garcia, who is ranked down at 55 and can be a wobbly closer, made no mistake on her own delivery.

Raducanu held serve twice to start the second set but was in trouble as soon as Garcia got into any rally, the Frenchwoman’s weight of shot simply superior to that of her much younger opponent.

The crowd tried to inspire Raducanu and cheered heartily when she immediately retrieved a break to level at 3-3 only for a double fault and backhand shanked into the tramlines to put Garcia ahead again, from where she pulled away to clinch victory.

Disappointment must be tempered by the knowledge Raducanu has many more chances to challenge for the latter stages at Wimbledon in the future, and her thoughts will now turn to the build-up to the defence of her title in New York later in the summer.

“I was preparing for this match really well,” Garcia said of her first appearance on Centre Court.

“Emma is a huge player and in her home tournament and she proved she can do very well on the big stage. It’s fair that they support Emma and of course is a great memory for me.”

Harriet Dart became the 10th British player to make it through to the second round with a thumping win over Rebeka Masarova.

Dart, ranked 94 in the world, put in an impressive display to win 6-1 6-4, making it the best home performance at Wimbledon since 1984.

The 25-year-old will face eighth seed Jessica Pegula in the second round.

Second seed Anett Kontaveit tumbled out of Wimbledon, thumped 6-4 6-0 by big-serving Jule Niemeier, who is making a mark on her first appearance at the Championships.

Niemeier, 22 and ranked 97 in the world after injury problems disrupted her early progress on the tour, jumped and punched the air on match point.

“It’s amazing,” she told an appreciative lunchtime crowd. “It’s one of the greatest wins of my career so far.”

Niemeier said she was nervous before the match on a show court. “But I love to play on grass… it suits my game.”

Ukraine’s Lesia Tsurenko showed support for her war-torn country by wearing a yellow and blue ribbon during a second-round win over compatriot Anhelina Kalinina.

The Ukrainian duo were well supported on Court 12 and after a slight delay due to rain, produced two hours and 30 minutes of high-quality tennis.

It was Tsurenko who progressed 3-6 6-4 6-3 and in the process dumped out world No 34 Kalinina in a mini-shock in round two.

Tan stunned Centre Court by defeating Serena Williams on Tuesday night in a first-round singles match lasting more than three hours and will take on Sara Sorribes Tormo in the second round on Thursday.

Tan then pulled out of the doubles on Tuesday afternoon ahead of a scheduled clash against Nadiia Kichenok and Raluca Olaru citing a thigh injury, which did not go down well with her partner Korpatsch.

The German, who was beaten by Heather Watson in the first round of the singles wrote on Instagram: “Unfortunately my doubles partner H. Tan retired from our doubles today.

“She just texted me this morning. Let me wait here one hour before the match start. I’m very sad, disappointed and also very angry that I can’t play my first doubles Grand Slam.

“And it’s really not fair for me I didn’t deserve that. She asked me before the tournament if we wanna play doubles and I said yes, I didn’t ask her, she asked me! If you’re broken after a 3h match the day before, you can’t play professional. That’s my opinion.”