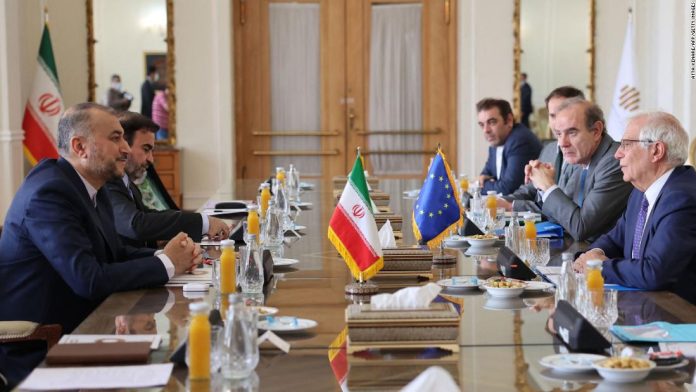 Instead, the talks — which were brokered by the European Union — were left in a stagnant spot, “which at this point means backwards,” the official said.
Top EU official Enrique Mora tweeted Wednesday that there had been “two intense days of proximity talks in Doha on #JCPOA,” the acronym for the formal name of the deal, the Joint Comprehensive Plan of Action.
“Unfortunately, not yet the progress the EU team as coordinator had hoped-for. We will keep working with even greater urgency to bring back on track a key deal for non-proliferation and regional stability,” he said.
The spokesperson for the Iranian Foreign Ministry said in a tweet Wednesday that the talks were “intensive.”
“Iran presented its operational ideas and suggestions and the other side also presented their considerations,” spokesperson Nasser Kanani said, adding that Mora and Iran’s negotiator Ali Bagheri Kani “will remain in touch regarding the continuation of talks and the next stage.”
The discussions in the Qatari capital to try to restore the 2015 agreement followed months of standstill after numerous rounds of talks in Vienna, Austria, failed to reach a breakthrough. They were revived following a visit to Tehran last weekend by EU foreign policy chief Josep Borrell.
The US pulled out of the nuclear deal in 2018 under then-President Donald Trump, and Iran has increasingly rejected restrictions on its nuclear program imposed by the deal.
US and European officials have repeatedly warned that the window for a return to the Joint Comprehensive Plan of Action is getting smaller as Iran escalates its nuclear activities, with State Department spokesperson Ned Price saying in mid-June that “it’s an open question if we can get there.”
“There’s a lot to suggest we won’t be able to. But we are and have been preparing equally for scenarios where there is a mutual return to compliance with the JCPOA and the scenario where there is not,” he said at the time.
As recently as Monday, the Biden administration said it believed a mutual return to compliance was still in the US’ national security interest.
“In Iran, the United States’ view is straightforward and has been now for quite some time, which is that we’re determined to ensure that Iran does not acquire a nuclear weapon,” US national security adviser Jake Sullivan said.
“We think a diplomatic agreement is the best way to do that. We think a mutual return to the JCPOA is in the interest of the United States and our partners. And there is a deal available on the table to Iran, and it’s up to Iran to decide whether or not it wants to take it,” he added.
This story has been updated with additional details.