Home World What Are Varroa Mites And Why Is Australia Putting Their Honey Bees... 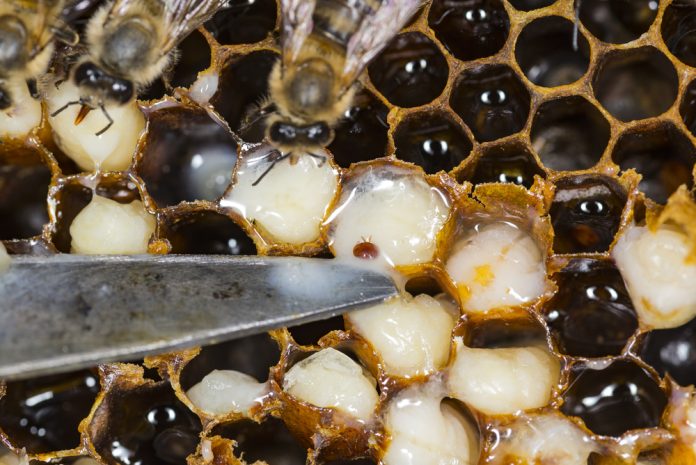 Bees are vital to our survival. They help pollinate our food and keep our ecosystem in balance. Without them, there would be massive food shortages and ecological collapse. While we rely on bees for food, so too does another organism — the Varroa mite.

These parasitic insects are the bane to any bee, beekeeper and bee enthusiast’s existence. They’re responsible for wiping out most of the wild honey bee population. This is why beekeepers in Australia have worked so hard to keep the parasite off the continent, until now.

Recently, a Varroa mite was found in a hive near Sydney sending all of New South Wales into a bee lockdown. These parasites are deadly and could have a detrimental impact on Australian honey bees.

What Are Varroa Mites?

The Varroa mite, or Varroa destructor, is a parasitic insect that lives off honey bee larvae and adult honey bees. These tiny red pests look similar to ticks and like ticks can carry harmful viruses. If a honey bee contracts a virus in the larval stage, adult honey bees can emerge malformed and weak. If each new generation continues to emerge weak, this can lead to the colony collapsing.

Varroa mites are an invasive species that originated in Asia, and spread to all continents where honey bees reside, except for Australia. However, with the recent discovery, New South Wales has put their hives into lockdown. During the growing season, hives are usually moved across the country to farm fields that need pollination — similar to the U.S. Unfortunately, to prevent the spread, all hives within a 10 km (six mile) radius will be destroyed. This will lead to a disruption in honey and agriculture production along with disruptions in the livelihoods of farmers and apiarists (beekeepers). While they may seem like mere insects, beekeepers typically have a strong connection with their honey bees. While there is a financial toll, there is a major emotional toll as well.

Varroa mites could also majorly impact the wild bee species. They spread viruses to their hosts and it’s possible that a virus could have deadly consequences for local pollinator populations. Native pollinators are needed just as much as honey bees for pollinating crops and other vegetation. A major infestation could possibly change the landscape of Australia.

How To Treat Varroa Mites

For apiarists on other continents, there are both chemical and natural ways to fight an infestation. Using a screen-bottomed board underneath a bee hive and powdered sugar can effectively remove mites as well. When powdered sugar is sprinkled on bees, it triggers a grooming response. During the grooming process, mites fall off and fall through the holes in the screen. Once outside of the hive, they’re unlikely to climb back up.

Brood break — or removing the queen from the hive for a few weeks — along with chemical treatment can slow the production of brood, causing Varroa mite reproduction to cease.

Other, softer chemicals derived from essential oils and other naturally occurring materials can treat an infestation as well. Some, like formic acid, work well to penetrate the caps of broods and kill infant mites. However, if not careful, this treatment can lead to the death of young bees and even the queen. Treatments such as Oxalic acid, Thymol and Hops beta acids are also affected but do not penetrate the brood caps. These treatments are best saved for in-between brood periods.

While these methods can help with an infestation, they haven’t been able to eradicate the problem as a whole. With the proper management, Australian beekeepers can hopefully save the lives of their future hives.

Experts say it’s about how often you exercise, not how much

‘A great gift to play the best’ – Raducanu relishing Serena...