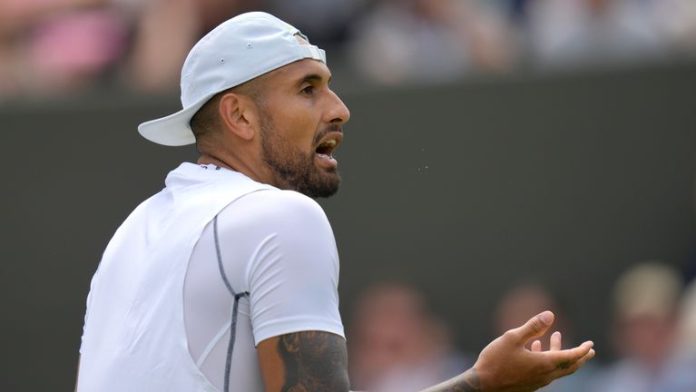 Katie Boulter and Jack Draper are among six British players in singles action at Wimbledon on Thursday; Rafael Nadal continues his quest for a calendar Grand Slam; Nick Kyrgios returns to action after controversial first-round victory

Katie Boulter will take centre stage at Wimbledon on Thursday as she and fellow Brit Jack Draper attempt to reach the uncharted territory of the third round at the All England Club.

Boulter, who is excelling on grass for a second successive summer, will attempt to reach the third round of a Grand Slam for the first time as she takes on No 6 seed Karolina Pliskova, first on Centre Court.

While it’s undoubtedly a huge challenge for the World No 118, there are several reasons to believe she is capable of knocking out last year’s runner-up.

The most obvious is that she beat Pliskova just a week ago in Eastbourne, crowning an impressive series of grass-court performances that saw her take notable scalps in Nottingham and Birmingham.

Also in the 25-year-old’s favour is the experience she gained at the same stage last year, when she put up a very competitive showing on her Centre Court debut against No 2 seed Aryna Sabalenka.

“Me going out there the past few weeks, I put those grass-court wins last year under my belt and I felt like I used them in the crucial moments,” Boulter said after Tuesday’s straight-sets victory over Clara Burel.

“I learnt from my mistakes against Sabalenka. When I was playing Pliskova last week, it did make a difference to me because I know I can be in those places.

“Over the past few years, I’ve had a lot of close matches with very, very good players, but I could never quite get over the line. I feel like I now have the belief to be able to do that. Hopefully I can produce that more and more.”

Despite Emma Raducanu and Andy Murray’s disappointing exits on Wednesday, the fact that 10 Brits – the most since 1984 – advanced to the second round, means there is still plenty of home interest on Thursday.

Heather Watson will return to court after being agonisingly forced off by darkness on Wednesday night when preparing to serve for the match against China’s Wang Qiang. Watson leads 7-5 5-4 and will reach the third round for the first time since 2017 if she can win the opening game.

Also back in action is Harriet Dart, who takes on No 8 seed Jessica Pegula, who has reached the quarter-finals at both Grand Slams this year. Dart is seeking a repeat of 2019, when she made it through to the third round at Wimbledon.

“I’m absolutely loving it,” Boulter said of the strong British contingent in the second round. “I feel like everyone’s pushing themselves, almost just spurring each other on with the little bit of magic that’s going on in British tennis right now. I feel like I’m catching a little bit of it and I hope that I can push other people with that.

“It’s really nice to be a part of it. I know how hard they work behind the scenes. Everyone’s doing great, and hopefully we can keep that going. We’re in a really, really good place. I hope that, yeah, many more wins will come off the back of that.”

Despite her excitement at the level of British success, Boulter may have split loyalties when her compatriot Jack Draper plays in the third scheduled match on No 1 Court.

Draper is up against Australia’s No 19 seed Alex de Minaur, who also happens to be Boulter’s boyfriend.

The 20-year-old Brit is reaping the rewards of grinding his way up the rankings via the Challenger Tour, and arrived at Wimbledon full of confidence after reaching the last four at Eastbourne last week.

Draper, whose only previous Grand Slam appearance came in a first-round exit – at the hands of Novak Djokovic – at Wimbledon last year, backed up his recent form with a straight-sets victory over Belgian Zizou Bergs on Tuesday.

Recent wins over Taylor Fritz at Queen’s and Diego Schwartzman at Eastbourne have shown Draper is capable of beating a top-20 player, but doing it over five sets will provide an even greater challenge.

There is also pressure on De Minaur, with the 23-year-old looking to reach the third round at Wimbledon for just the second time in his career.

“Alex is someone who has been around for a long time,” Draper said. “I think people forget he’s still very young. He’s a great competitor, incredibly quick, good on grass courts, as well. It’s going to be a really tough match. I think I can use my weapons and hopefully play well.”

Despite his relative inexperience, Draper may have been able to hand out a couple of tips to his fellow Brits, with Liam Broady and Alastair Gray up against his recent top-20 scalps.

Broady faces No 12 seed Schwartzman on Court 3, while Gray takes on No 11 seed Fritz on Court 12.

Who else is in action on Thursday?

Also in action on Centre Court will be two-time champion Rafael Nadal, who continues his quest for a calendar Grand Slam against Ricardas Berankis of Lithuania.

All eyes will be on No 2 Court as Nick Kyrgios returns to action after an eventful five-set first-round victory over Britain’s Paul Jubb.

Kyrgios admitted spitting in the direction of a “disrespectful” spectator after sealing the hard-fought win, which also saw him clash with a line judge.

The Australian takes on No 26 seed Filip Krajinovic of Serbia and can make it through to the third round at Wimbledon for the sixth time if he wins.

Top women’s seed Iga Swiatek will be looking to extend her 36-match winning streak as she takes on Lesley Pattinama Kerkhove of the Netherlands on No 1 Court, while No 11 seed Coco Gauff is set to close the show on Centre Court as she goes up against Mihaela Buzarnescu.