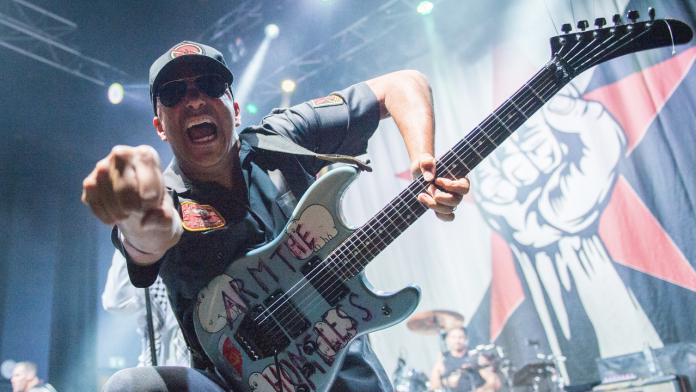 Vancouver’s pop and soft rock contemporary radio station KiSS Radio 104.9 FM has been playing a censored version of Rage Against the Machine’s song “Killing in the Name” on repeat for hours since early this morning (June 29). Yesterday, three of the station’s popular DJs and radio hosts—Kevin Lim, Sonia Sidhu, and Tara Jean Stevens—were laid off from the company after working there for more than five years. When a listener called in to request a different song, the DJ allegedly ignored it and continued to play Rage Against the Machine, reports The Vancouver Sun.

“KiSS is changing and, unfortunately, we were informed that we will not be part of this new chapter,” said Lim and Sidhu during their final broadcast yesterday. “It comes with mixed emotions, as you can probably hear.”

An iconic protest song from Rage Against the Machine’s 1992 self-titled self-titled debut, “Killing in the Name” famously includes the lyrics “Fuck you, I won’t do what you tell me.” Upon learning of the incident, RATM guitarist Tom Morello retweeted one fan’s suggestion that the song choice is due to the staff changes: “A pop radio station in Vancouver laid off all of their staff yesterday. Whoever is on the controls this morning has been playing ‘Killing in the Name’ on repeat since 6am (it’s now 9:30). It’s beautiful.” However, other radio stations over the years have used a similar tactic before undergoing a format changeover.

At publication time, “Killing in the Name” was still playing on loop at KiSS FM. Pitchfork has reached out to the radio station for comment.

Next month, Rage Against the Machine will begin their highly anticipated “Public Service Announcement” tour.  Run the Jewels will join them for the dates that take place across North America in early 2023. The band recently announced their decision to donate the ticket sales for their upcoming reunion concerts in Wisconsin and Illinois to local reproductive rights organizations. The total amount is nearly half a million dollars.