Home Sport Leach patience pays off as he proves he belongs on Test match... 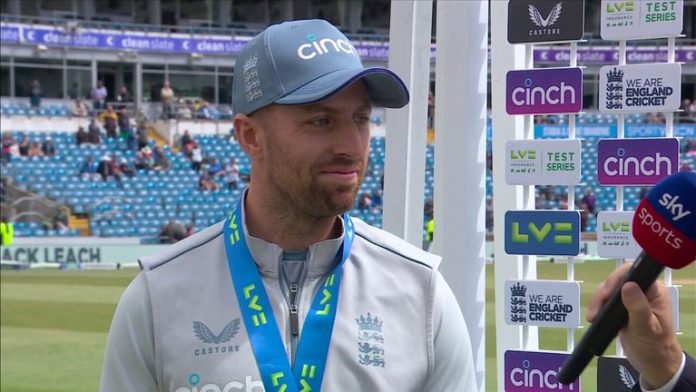 Jack Leach joined Graeme Swann as the only England spinners to take 10-for at Headingley since Derek Underwood 50 years ago; Watch England vs India live on Friday from 9.30am on Sky Sports Cricket, with play getting under way at 10.30am

Jack Leach’s Test career thus far has been an exercise in patience and persistence.

Made to wait over four years from debut to a first Test five-for on home-soil, the left-arm spinner followed it up with five more in the second innings of England’s third Test win over New Zealand at Headingley.

It was fitting reward for a fine performance with the ball, and perfectly timed as his place in the side was beginning to come under increasing scrutiny after a trying Ashes winter was followed by a tough tour of the West Indies and concussion on day one of the New Zealand series.

As Leach was helped from the field at Lord’s, it looked like his stop-start international career had been abruptly halted once more – and perhaps for the final time – as young Lancashire leg-spinner Matt Parkinson deputised impressively as a concussion sub for the 31-year-old, and with Moeen Ali and Adil Rashid both stating their interest at potential Test returns.

Leach has battled with Crohn’s disease since the age of 14, while he suffered from a dangerous bout of sepsis in New Zealand at the start of 2020, and his ‘at risk’ status saw him often the casualty in the Covid landscape that cricket and world sport was played in over the next two years.

But England – and the new management team of captain Ben Stokes and coach Brendon McCullum – showed faith in Leach, bringing him immediately back into the fold for the second Test at Trent Bridge, being royally rewarded for doing so a week and a half later.

Leach got through more than 70 overs of work in the third Test, sending down 20 maidens and taking 10 wickets for 166 runs – joining Graeme Swann as the only England spinners to take 10-for at Headingley since Derek Underwood 50 years ago.

Swann, part of Sky Sports’ coverage for the second Test at Trent Bridge, prophetically said that Leach had the ability to be “world class”, believing the step up to the international game to be “all mental”.

Swann, who took 255 wickets in 60 Tests for England, said: “I think Leach, like many spinners in England, has the chance to be world class, because I don’t think there’s that much of a jump between what you do at first-class level and international cricket.

“And I know that because I’ve done it myself. It’s all mental, it’s all in your head.

“I’d love to sit down and convince him he is more than capable of doing it on the biggest stage.”

He added: “I think it’s very important the fact that the captain Stokes is someone who shows faith in the spinners, and I think he will. He is a very front-foot captain.

“With a decent skipper and coach who are willing to attack and make you part of the team, everything will go the right way.”

And so it proved at Headingley, Stokes threw Leach the ball as early as the 13th over of the match, with the bold move immediately reaping dividends with Leach taking a wicket with his first ball, Will Young out lbw.

“The skipper just keeps bowling him, keeps thrusting him towards pressure,” McCullum told Sky Sports after the game.

Leach, rose to the occasion and, glowing with a new-found confidence and belief, showcased superb control throughout the Test and greater guile, with former England batsman Mark Butcher speaking to the extra “drift, dip and sharp turn” the left-arm spinner found during his star turn.

Leach credited the backing he has received from Stokes and McCullum as being behind his ‘player of the match’ performance.

“Stokes’ confidence in his decisions but also us as 11 blokes, I have never experienced anything like it,” Leach told Sky Sports.

And with regards to the new head coach, he added: “A very positive guy and he speaks very well and very clearly at the moments where maybe we might be getting a little bit tetchy or unsure.

“He makes us very certain and have complete clarity about what we’re trying to do.”

Leach has never been more certain of his role in this England side and next takes his new-found confidence into the sternest test of an international spinner’s credentials, a meeting with India at Edgbaston on Friday.

Stokes has promised that England will come out with the same positive mindset in the rescheduled fifth Test from last year, with Leach likely to once more be ‘thrusted towards pressure’ as the hosts look to level the series.

If his showing at Headingley is anything to go by, Leach will be ready for when the skipper looks his way.

Watch day one of the rescheduled fifth LV= Insurance Test between England and India, at Edgbaston, live on Sky Sports Cricket with coverage starting at 9.30am and play getting under way at 10.30am, on Friday.