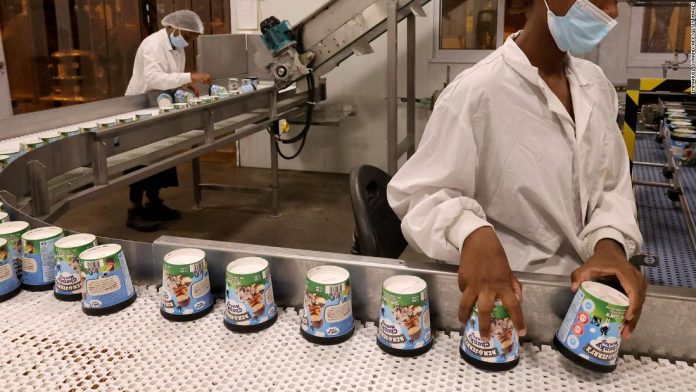 Unilever announced Wednesday the sale for an undisclosed amount to American Quality Products (AQP), which distributes Ben & Jerry’s in Israel. Going forward, under AQP ownership, Ben & Jerry’s will be sold under its Hebrew and Arabic names throughout Israel and the West Bank.
The sale ends a long saga that had angered ice cream fans on every side of the Israel-Palestine conflict.
The Vermont-based ice cream company, which has been doing business in Israel since 1987, has come under scrutiny for its relationships in Israel in recent years as tensions in the region flared. Critics took the company to task for doing business in Israel — especially in West Bank settlements, considered illegal under international law — arguing it doesn’t align with Ben & Jerry’s liberal image.
The company had been mostly silent on the topic: In 2015, Ben & Jerry’s posted on its website that it was “keenly aware of how complex the local market can be,” and it believed it could affect positive change by maintaining a presence in the region.
But Ben & Jerry’s had a change of heart in July 2021, saying it heard and recognized the concerns shared by its fans and partners, opting to get out of making ice cream in Israel — and selling in the West Bank altogether.
Last summer, Ben & Jerry’s informed AQP that its agreement with the company would not be renewed when it expires at the end of 2022. After that, the company’s ice cream would continue to be sold in Israel “through a different arrangement.”
But that decision sparked a new wave of controversy: Some claimed that Ben & Jerry’s was joining the Boycott Divestment Sanctions (BDS) movement, which the Anti-Defamation League says is aimed at delegitimizing Israel’s right to statehood and has some roots in antisemitism. The company denied any involvement with BDS.
“Unilever rejects completely and repudiates unequivocally any form of discrimination or intolerance,” the company said Wednesday. “Antisemitism has no place in any society. We have never expressed any support for the Boycott Divestment Sanctions (BDS) movement and have no intention of changing that position.”
AQP sued the companies in March for “unlawfully terminating its 34-year business relationship in order to boycott Israel.” Ben & Jerry’s and Unilever did not comment on the lawsuit.
But Unliver said Wednesday that it “has used the opportunity of the past year to listen to perspectives on this complex and sensitive matter and believes this is the best outcome for Ben & Jerry’s in Israel.”
Israeli Foreign Minister Yair Lapid said in a statement that he “thank[s] Unilever for the action they have taken to resolve this matter.”