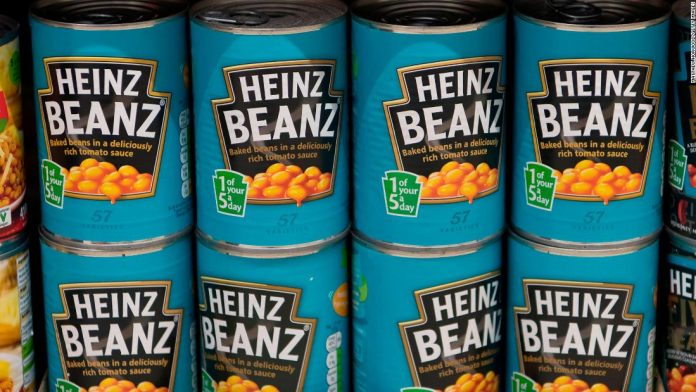 Tesco (TSCDF), the country’s biggest supermarket chain, has stopped selling some products made by Kraft Heinz (KHC) in a dispute over prices.
Kraft Heinz is behind some of the country’s favorite pantry staples, including baked beans and ketchup.
Several Heinz products were out of stock on Tesco’s website, including baked beans, ketchup and salad cream.
The Grocer, the magazine which broke the news of the pricing dispute, visited a Tesco store in southern England and reported that, while some Kraft Heinz products were still available, some others were missing.
“With household budgets under increasing pressure, now more than ever we have a responsibility to ensure customers get the best possible value, and we will not pass on unjustifiable price increases to our customers,” a Tesco spokesperson told CNN Business on Wednesday.
The retailer — which has about 27% of the UK’s grocery market, according to research firm Kantar — said it had “plenty of alternatives to choose from” and hoped to resolve the issue soon.
Rising global food and energy costs have squeezed manufacturers, leaving them little choice but to try to pass on higher prices to retailers and their customers. In the United Kingdom, consumer price inflation hit 9.1% in May — its highest level in 40 years, and the highest among the “Group of Seven” rich countries.
Kraft Heinz told CNN Business that it was “working closely with Tesco to resolve the situation as quickly as possible.”
The company said that the current economic environment was “challenging” with rising commodity and production costs meaning that consumers were “working within tight budgets.”
“We always look at how we can provide value through price, size and packs,” the US company said.
UK retailers are acutely aware of how the cost-of-living crisis is causing customers to cut back. More than 44% of adults in Great Britain said last month they were buying less food — up from 18% at the start of the year — according to a survey by the Office for National Statistics.
Earlier this month, Tesco CEO Ken Murphy said he had seen “early indications” of customers changing their behaviors as a result of inflation.
Tesco’s spokesperson said that the company was “laser-focused on keeping the cost of the weekly shop in check.”
— Danielle Wiener-Bronner contributed reporting.