Home World Why Some Dogs Fear Fireworks and What To Do 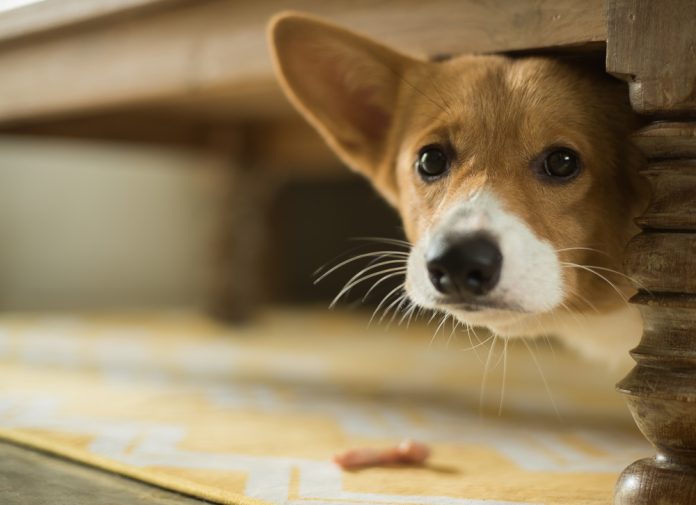 Not all dogs are afraid of fireworks. But it’s important to know if your dog is afraid of booming noises, especially near the Fourth of July. If you’re a new dog parent, you’ll need to watch how your pooch reacts to intense summer thunderstorms or all the hoopla that comes with celebrating the founding of our country.

Why Does my Dog Fear Fireworks?

Canine misophonia is the fear of specific sounds and/or noise sensitivity that trigger a fight-or-flight response in your pooch. It’s important to note that canine misophonia is its own diagnostic condition; that is to say, a dog with misophonia may not have generalized anxiety.

Humans can have it too, and it’s defined as “hatred of sound.” Some sounds that may be minor annoyances to others set off people with misophonia, like the sound of someone breathing or chewing. Reactions can include irritability, sweating and increased heart rate. While there are not a lot of studies on human misophonia, it’s estimated that it effects about 20 percent of the population.

Researchers have studied the subject of canine misophonia more, though. They suggest it affects 17 to 40 percent of the dog population. The range is so large because experts recently determined that misophonia is more prevalent in certain breeds, says Nicholas Dodman, co-founder and president of the Center for Canine Behavior Studies in Massachusetts.

Dogs who fear loud noises — the backfiring of a truck or the boom of thunder — will display their fear in a variety of ways. “You don’t have to be a rocket scientist — you just look at the dog and you see it’s terrified,” says Dodman, who is a professor emeritus at Cummings School of Veterinary Medicine at Tufts University.

A dog that’s scared wants to escape, so it will pull on its leash, pant and tuck its tail. “Sometimes you see a white flash in the eyes — that’s called whale eye. They roll their eyes back,” says Dodman.

Nature and Nurture For Different Breeds

A 2020 study determined that, “genetic susceptibility” is a key player in canine misophonia. “We identified breed differences in fear of fireworks, fear of thunder and fear of surfaces and heights,” the study says. “The Cairn Terrier was one of the most fearful breeds in all three subtraits, whereas the Chinese Crested Dog was one of the least fearful breeds.”

Dodman, too, studied thunderstorm phobia, “and we found that almost half the [fearful] dogs were either herding breeds or herding breed-crosses,” says Dodman. Research suggests that herding breeds — Shelties, Border Collies or shepherds — are more fearful because of how they were bred: to herd sheep, for example, but to not kill them.

“And I believe what that’s done is it’s inbred a certain amount of trepidation in them, if you will. A failure to commit,” says Dodman. The opposite is true of dogs bred to fight. “The bull breed dog that was trained to attack and go forward […] was bred not to have fear, but sheepdogs and shepherd dogs were bred to have fear,” explains Dodman.

There are also environmental factors to the nurture side of noise phobia. Though Dodman says, nobody knows specifically how this fits into firework phobia, he does say that early on in a pup’s life, there are sensitive periods of learning. During this time, a new dog owner can play doorbell sounds, fire alarms, firework noises and thunderstorm noises to desensitize or counter condition their new pooch. They can play them at first softly and then at an increasing volume.

Canine misophonia “could be a combination of nature and nurture,” concludes Dodman, whose own dog fears his wife’s cooking. “My dog, as a matter of fact, really doesn’t care about thunderstorms,” says Dodman. “[But,] the fire alarm really upsets him and he knows what comes beforehand and usually it’s my wife going towards the stove. […] So basically whenever she goes to the stove and there’s a sort of crackling fizzy noise, he’s already afraid but he knows what comes next,” says Dodman — the fire alarm.

If you’ve chosen to bring your pup to a fireworks event, Dodman says to keep an eye on them and see if the noise is triggering.

“If he happens to be, say, one in six dogs who has that problem and you’ve never noticed that before or it’s a new acquisition, [your] job is to get him out of that situation as fast as possible. You have to leave the [fireworks] display. Never mind the beauty of the calisthenics of the fireworks, you’ve got to head for your car. You got to get in your car. You’ve got to shut the doors and move away from that place,” says Dodman.

Dodman suggests playing some classical music or something melodic to calm your dog; white noise is another option. The goal is to drown out the sounds of the fireworks or any other troubling sound, like thunder.

The bottom line for dog owners is the better you can understand your dog’s fears, the more you can improve your dog’s quality of life. If you plan to bring your dog to a fireworks display, plan to leave early if your dog gets scared.