Home Sport Friday at Wimbledon: Djokovic, Norrie on Centre Court, Watson on No 1 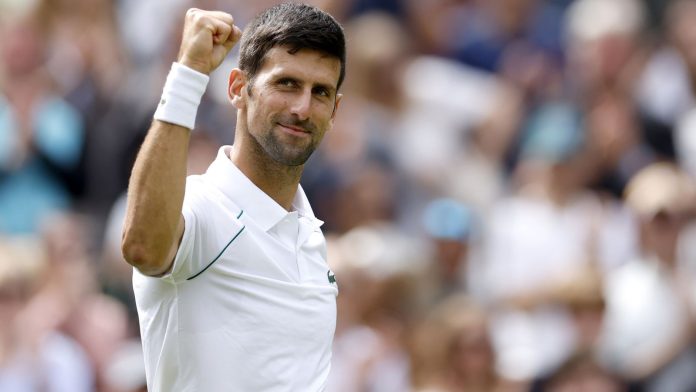 Novak Djokovic is vying for a fourth straight title; the 35-year-old has not lost a match at Wimbledon since 2017; Cameron Norrie will take on Steve Johnson who beat British wildcard Ryan Peniston last time out; Heather Watson will face Kaja Juvan on No 1 Court

Top seed Novak Djokovic and British No 1 Cameron Norrie will be on Centre Court in the third round of the men’s singles at Wimbledon on Friday.

Djokovic, who beat Thanasi Kokkinakis in straight sets in the second round on Wednesday, will take on countryman Miomir Kecmanovic in the second match of the day on Centre Court. The 35-year-old Serb is vying for a fourth straight title to move level with Pete Sampras on seven, and within one of men’s record-holder Roger Federer.

After completing his victory on Wednesday, Djokovic said: “I must say I’m quite pleased with the way I’ve raised the level of tennis in two days.

“Hopefully I can keep that trajectory, just thinking about the next challenge and hope things will get better as the tournament goes on.”

Norrie is through to the third round after going the distance in a five-set thriller with Jaume Munar, and on Friday will take on Steve Johnson who beat British wildcard Ryan Peniston in straight sets last time out.

Third seed Ons Jabeur will be first in the main stadium against 19-year-old Diane Parry.

Jabeur has had a breakthrough season where she has shot up to world number two and even though Wimbledon had its ranking points stripped, it has not stopped the Tunisian from dreaming.

“I don’t like to focus on the negative things,” she added. “If I win this, I’ll be the only player to win a Grand Slam without points!”

Heather Watson will be first on No 1 court on Friday after making it through to the third round of Wimbledon for the fourth time courtesy of a 7-5, 6-4 victory over Qiang Wang. The final game of the match was played on Thursday after the pair were forced off by darkness on Wednesday night.

Watson will take on Slovenia’s Kaja Juvan, who beat Dalma Galfi in the second round.

Former champion Angelique Kerber and up-and-coming Carlos Alcaraz will be on No 1 Court after Watson, playing Elise Mertens and Oscar Otte respectively.

Once tipped as a claycourt specialist, Alcaraz proved his mettle on hardcourts earlier this year when he won the Miami Open but he had no match practice on grass after skipping the Wimbledon tune-up at Queen’s Club due to an elbow issue.

But he has advanced to the third round at the All England Club for the first time in his career and the 19-year-old can consider himself one of the favourites with the men’s field decimated by bans, injuries, illnesses and some early upsets.

The youngest man in the draw survived a five-set encounter in the first round before cruising past the second round with a straight-sets win over Tallon Griekspoor.

“I felt more comfortable (against Griekspoor) than the first round. But obviously, as I said, I need more hours on court, on grass, to feel more comfortable,” Alcaraz said.

“The crowd is amazing. Of course, playing on grass is so beautiful for me… I like (to) play on grass and I enjoy playing here in Wimbledon.”

Who else is in action on Friday?

On No.2 Court, John Isner will face Jannik Sinner after beating Andy Murray in four sets in the second round.

“It was an incredible honour to play him on this court in front of this crowd. At the age I’m at now, I need to relish these moments. This was one of the biggest wins of my career,” Isner said after the match on Wednesday.

Caroline Garcia, who knocked out Emma Raducanu on Wednesday, will face China’s Shuai Zhang on No.3 Court.

“Emma is a huge player and in her home tournament and she proved she can do very well on the big stage. It’s fair that they support Emma and of course is a great memory for me,” Garcia said of her first appearance on Centre Court.

Jamie Murray will be in action with Venus Williams, with the pair taking on Alicja Rosolska and Michael Venus in the first round of the mixed doubles.