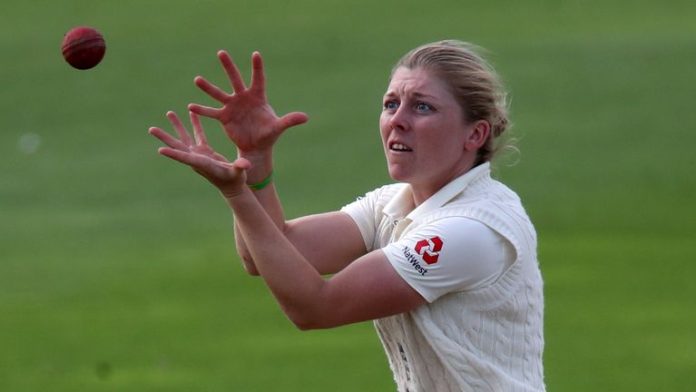 England captain Heather Knight: “It’s important the good things from this Test are remembered. It’s a little bit the start of a new era and all the debutants have taken their chance” – multi-format series vs South Africa continues with first ODI on July 11, live on Sky Sports

Heather Knight reiterated her desire for Women’s Test matches to be played over five days, and hailed England’s debutants after the rain-affected draw with South Africa at Taunton.

South Africa were 181-5, and leading by 48 runs, when a second downpour of the day ultimately led to the match being abandoned and the sides sharing the four points on offer in game one of the multi-format series.

The absence of a fifth day shredded England’s hopes of a first Test win since 2014 and South Africa’s chances of perhaps setting the hosts a tricky fourth-innings run chase in Somerset.

Asked about five-day women’s Test matches, Knight said: “I have given my opinion on this before and it hasn’t changed. I think five days.

“We play Test cricket so rarely that it is important for the format to make it exciting and for it to come to a crescendo.

“It is a real shame that the rain has intervened and that the conversations will be around the four-day, five-day debate rather than on some of the debutants. It’s important the good things from this Test are remembered.”

Wong rattled South Africa with her pace and Bell starred with her booming in-swingers as the pair impressed after replacing the now-retired Anya Shrubsole and Katherine Brunt in the England bowling attack.

Davidson-Richards scored 107, sharing a 207-run stand with Nat Sciver as England recovered from 121-5 to 417-8 declared, while the fourth and final debutant, Lamb, hit a composed 38 at the top of the order.

Knight added: “It’s a little bit the start of a new era and all the debutants have taken their chance. It was really exciting to see what they can do.

“The young seamers [Wong and Bell] were brilliant. I just let them loose!

“They have such an energy and a spark and bowled some really good spells. It has been so exciting to stand at first slip watching them tear in.

“How good was Alice Davidson-Richards? The maturity she showed in her first innings in a tricky spot was remarkable. Emma Lamb also looked really assured.

“We really played the game in the right way. Every opportunity we had, we looked to take the game forward with bat and ball. We spoke about that before the Test and we did it.”

Knight added: “We will pick the squad in the next day or two but I think it will have a similar sort of look [to the Test squad]. We want to give young players an opportunity and now is an ideal time to do that.”

Watch the first ODI between England and South Africa live on Sky Sports on Monday, July 11. Coverage begins at 1.30pm with the first ball at 2pm.