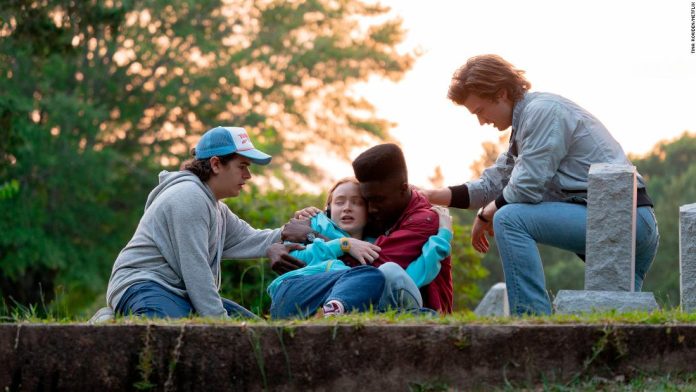 This season has already turned the Kate Bush song “Running Up That Hill” into a chart-topping hit 37 years later, but the way the episodes unfold “running” isn’t quite the word for it; rather, it’s more like brisk walk with detours along the way.
In hindsight, the main innovation might have to do with scheduling, with this Volume 1 and 2 approach (timed first to Memorial Day, and now the Fourth of July) spreading the wealth for Netflix, which really should consider dropping episodes weekly for the finishing run to milk the media attention that much longer.
With their story unfolding in multiple locales, series creators the Duffer brothers have broken open the special-effects piggy bank, while giving their characters room to breathe — exploring more grown-up teenage problems through the prism of small-town Indiana in the mid-1980s.
Still, the show never ventures too far from its deep pop-culture roots and knowing homages, whether that’s a nod to “Halloween” or having someone say “I’ve got a bad feeling about this” to beguile the “Star Wars” faithful.
Without giving anything away, this season also seems to have come to grips with the fact that the extraordinary threat won’t be overcome without cost, adding a deeper level of resonance and higher stakes to the storytelling.
That said, the fourth season has felt deficient on a few levels, beginning with the main villain, Vecna, who bears a rather uninspired resemblance to the Crypt Keeper from the Tales From the Crypt comics. The third-season cliffhanger that sent Hopper (David Harbour) behind the Iron Curtain also dragged on too long, even if revisiting the Cold War proved unexpectedly timely.
Where does that leave the show? At its best back where it started, with Eleven (Millie Bobby Brown, who would win the Emmy for “looks of intense concentration” if such existed) bravely standing between humanity and potential destruction, flanked by the sweetly nerdy Mike (Finn Wolfhard) and Will (Noah Schnapp).
The flashbacks to Eleven’s back story have been among the strongest elements of the current season, offering further evidence of her tortured youth and the burdens placed upon her.
“She’s special. She was born special,” Mike says, wondering how long Eleven will need an ordinary guy like him, to which Will replies that Mike is the heart of their group — a little on the nose, perhaps, but as observations go, not wrong either.
“Stranger Things” has become a major asset for Netflix, and the hoopla and anticipation surrounding the final episodes will surely be off the charts.
In a way, though, Season 4 has played like a (very) extended preview for that, feeling too much like a great big coming attraction for what’s hopefully the more satisfying payoff to come.
“Stranger Things” premieres the final two episodes of Season 4 on July 1.