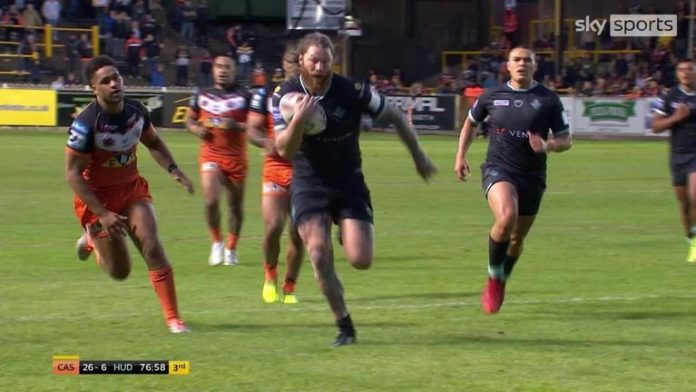 Castleford brought Huddersfield’s six-match winning run to an end with a 26-18 victory at the Jungle on Friday.

It meant Huddersfield missed the chance to go second in the Betfred Super League.

Trueman, who came off towards the end with a leg injury, and centre Jake Mamo, one of six former Huddersfield players in the home line-up, scored Castleford’s other tries.

Huddersfield, who handed a debut to new centre signing Toby King in place of the injured Ricky Leutele, were strangely out of sorts against energised opponents as they suffered a first league defeat since April.

They had made the livelier start, forcing two goal-line drop-outs, and the opening score was something of a gift for Castleford as Trueman pounced on a loose pass 20 metres out from the Giants line and got Olpherts over for his first try.

Trueman then produced a lethal combination of strength and pace to score a solo try from halfway and Richardson’s second conversion made it 12-0 after 13 minutes.

Richardson followed up a 40-20 kick with a penalty to stretch his side’s lead further to leave Huddersfield reeling.

The Giants were full of errors and their night was summed up on 30 minutes when winger Jermaine McGillvary attempted to intercept Trueman’s pass only to deflect the ball into the grateful hands of Olpherts as he went over for his second try.

Richardson’s fourth goal made it 20-0 but McGillvary stemmed the onslaught seven minutes before the break when he caught full-back Tui Lolohea’s high kick and brilliantly forced his way over for his 201st try for his home-town club.

Will Pryce’s touchline conversion cut the half-time deficit to 14 points but Castleford snuffed out any chance of a fightback when second rower Kenny Edwards, currently on loan from the Giants, wriggled free of an attempted tackle by Pryce to get Mamo away for their fourth try five minutes into the second half.

Castleford went further ahead on 55 minutes with a second penalty goal from Richardson but they suffered a blow when Trueman limped off and skipper Paul McShane, who began the match from the bench, was shown a yellow card on 71 minutes for a dangerous tackle.

That allowed the Giants to finish with a flourish as they scored 12 points in the last three minutes which produced a scoreline that flattered them.

Second rower Chris McQueen went through a gap in the Tigers defence for his 13th try of the season and skipper Luke Yates burst through to get Pryce over for their third try, to which he added his third conversion.

Castleford finished the game with 11 men after Edwards was sin-binned for a professional foul but it could not take the gloss off an impressive performance from Lee Radford’s men.