Home World Taiwan accepts same-sex marriage, so why not adoption? 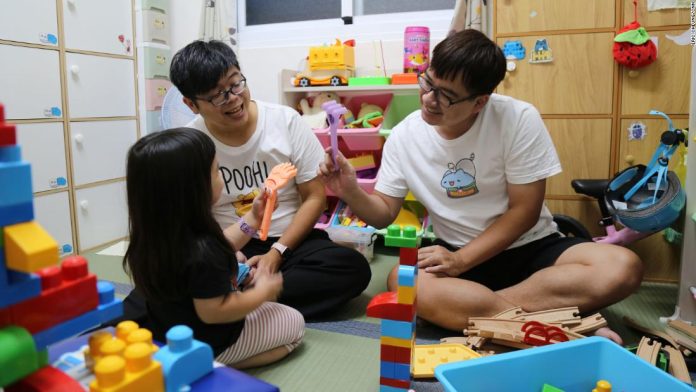 This year, in a landmark legal case, the two men became the first same-sex couple on the island to legally adopt a child neither of them are related to.
Now they’re living their family dream with daughter Joujou, 4, in the southern city of Kaohsiung, in an apartment decorated with rainbow flags and family photos. Yet, while their family life is happy, their hard-fought court victory is bittersweet.
While the court made an exception for the couple, the law they challenged remains on the statute books and continues to restrict the civil liberties of other same-sex couples — staining, they say, the island’s reputation as one of Asia’s most progressive jurisdictions when it comes to LGBTQ rights.
“We can’t be too happy about our victory, because a lot of our friends are still facing many difficulties,” said Chen, 35. “Even after same-sex marriage was legalized, we did not feel welcome to have children together as a family,” added Wang, 38. “We were treated like second-class citizens.”
While Taiwan in 2019 became the first jurisdiction in the region to legalize same-sex marriage, the legal change stopped short of granting full rights of adoption to homosexual couples.
That has created a strange loophole in which heterosexual couples — and single people of all sexual orientations — are allowed to adopt children to whom they are not biologically related, but same-sex couples aren’t. To this day, Wang and Chen remain the only same-sex married couple on the island to have done so.

A blot on a progressive reputation

Activists say this loophole shows that despite the strides Taiwan has made in recognizing LGBTQ rights, the island has a long way to go before same-sex couples have true equality.
The adoption loophole is not the only problem left over from 2019. The legal change also failed to grant full recognition to same-sex transnational marriages; foreign spouses are recognized only if same-sex marriage is also legal in their home jurisdiction.
Freddy Lim, an independent member of parliament in Taiwan who advocates for LGBTQ rights, said the loophole arose because at the time the law was changed, society still “faced a lot of opposition from anti-LGBTQ groups,” so the government focused “only on legalizing marriage, but not rights relating to child adoption.”
However, Lim believes that since then attitudes have changed sufficiently for the law to change again. In May, Lim and a bipartisan group of lawmakers proposed updating the law with a bill he hopes can be passed by the end of the year.
“If a society treats people differently based on their sexual orientation, it must have a strong reason out of the public interest. But there is none, so it is clearly a form of discrimination,” Lim said.

From despair to a miracle

Any change cannot come too soon for Wang and Chen, who hope their friends are spared the ordeal they faced.
Wang and Chen, both teachers from southern Taiwan, had been dating for more than a decade when they began the process of adoption in 2016. Wang made the application in his name and a court affirmed his suitability in 2019 — following rigorous checks on both men by social workers.
Things looked all set for a happy family life.
“When same-sex marriage was legalized (a year later), we had the hope of raising a child together,” Chen recalled.
However, Chen was told that he would be unable to register as the girl’s legal parent — even if the pair got married. It was heartbreaking for Chen, who found himself prevented from exercising the sort of parental duties most families take for granted — like signing his daughter’s school or bank documents.
“Every time when we had to make applications for our daughter, I was scared of being asked about my relationship with her. I have always been her father, but I was not recognized as a parent,” Chen said.
In April last year, Wang and Chen — together with two other couples — filed petitions at a family court in Kaohsiung city. They had expected the case to be dismissed — figuring they could then appeal to Taiwan’s Supreme Court and ultimately force a change in the law.
However, to their surprise, in January the family court ruled in their favor on the grounds it was in Joujou’s best interest to have both legal parents. The other two cases were dismissed.
“I was astonished, it was a miracle,” Chen said. “Until then, I had been living together with my daughter, but I was not related to her under the law.”
Wang said the ruling was significant for two reasons: it made it easier for the couple to look after their daughter — and it also gave hope to other couples like them.
“I feel relieved now,” Wang said. “Both of us can act as legal parents and share the burden. And if Joujou gets sick and has to visit a doctor, both of us are legally eligible to take leave and care for her.”

The problem is that the family court’s ruling extends only to Wang and Chen. Other same-sex couples in Taiwan still face an uphill struggle.
Jordan, an American woman, is battling to register as the mother of her Taiwanese wife’s adopted child. She met her wife, Ray, six years ago and Ray began the adoption process in 2018 — before the couple married.
The couple asked CNN not to disclose their full names to protect the 7-year-old girl.
“Initially, it was just my wife who was adopting because I wasn’t really too sure whether or not I wanted to be a parent at that time,” Jordan said. “But within about a month of my daughter coming home, she and I developed a really close relationship.”
Last April, Jordan filed her petition to a family court at the same time as Wang and Chen did. However, her case was dismissed.
“We want equal protection under the law,” she said. “If something were to happen to my wife — she has autoimmune disease, with Covid coming around — then not only would my daughter lose her mama, she would lose me too because she’d be taken away from me, as I’m not allowed to adopt her,” she said.
“We are a family, but it still feels like we are not a complete family. If it’s a right that’s afforded to straight people, it’s important for us to be treated exactly the same,” she added.
Jordan said while Taiwan’s progressive reputation had been boosted by its legalization of same-sex marriage, more effort was needed to ensure equality for LGBTQ couples.
“A lot of people — even here in Taiwan — don’t realize that we still don’t have full equality,” she said.
“It really kind of prevented us from being able to celebrate as much as we had wanted to.”
Still, activists say there are reasons for optimism.
Joyce Teng, deputy executive director of Taiwan Equality Campaign, said since same-sex marriage was legalized three years ago, there has been a “greater level of acceptance and support” in society.
In its latest annual survey published last month, the campaign found that 67% of Taiwanese supported allowing LGBTQ couples to adopt children, a rise of 8% from a year ago.
Wang said he hopes the law can be amended as soon as possible so that other couples can enjoy the same rights as him and Chen.
“There are many families who are afraid of filing petitions in court because they do not want to attract attention from society or the media,” Wang said. “If the law remains unchanged, many could be afraid to stand up for their rights.”
There is also Taiwan’s reputation to think about — not only as an enlightened jurisdiction for LGBTQ rights, but its image as a free and democratic beacon in the Asia-Pacific region.
“When the international community looks at Taiwan, we are often regarded as the first line of defense against authoritarianism,” said the lawmaker Lim.
“But if we are to truly portray ourselves as free, equal and democratic … then we must recognize and solve injustices in our society — and LGBTQ rights are an important part of this.”

Destination Dhofar: The tropical side of Oman