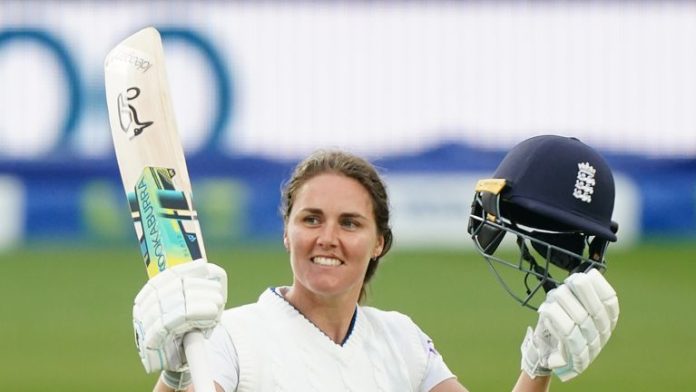 Women’s Test between England and South Africa ended in a draw this week, with rain ending the home side’s bid for victory at Taunton; England captain Heather Knight: “It’s important the good things from this Test are remembered”

In her latest blog, Phoebe Graham calls for women’s cricket to feature more Test matches between teams so that players can sample the “pinnacle” of the sport…

Playing Test cricket for your country. The pinnacle of every cricketer’s career.

Yet, whenever there is a women’s international Test match, teams are not only competing against each other, they are fighting to keep women’s Test cricket alive.

After the phenomenal Ashes Test in Canberra earlier this year, we saw a ripple of noise about women’s Test cricket and how fans want to see more. Despite this, the ICC chair, Greg Barclay recently stated women’s Test cricket was not a huge part of the future landscape.

Does England’s Test against South Africa this past week not pose the question once again, why aren’t female international cricketers playing more Test cricket?

We know there are big battles to tackle in women’s cricket globally, such as the structure of domestic teams and how to fully professionalise the game. Yes, it is important that the game has solid foundations, but like every career, there needs to be a pinnacle. Test cricket is the pinnacle.

This one-off Test against South Africa showed how entertaining women’s Test cricket truly is. There were 882 runs scored, three maiden Test hundreds reached – Marizanne Kapp, Nat Sciver and Alice Davidson-Richards – world-class fielding on show and 23 wickets taken. The game oozed quality, saw debutants step up and compete on the world stage and had its own twists and turns.

Kate Cross showcased her experience and class, taking four wickets in the first innings. South Africa posted a respectful 284, courtesy of Kapp’s sublime 150 and then had England 121-5, but this is where we saw one of the greatest partnerships of all time. Sciver and Davidson-Richards put on a 207-run partnership which helped England to declare on 417-8.

With a 133-run lead, it was time to see the rise of the debutant Issy Wong, getting into battles with some of South Africa’s finest, taking Laura Wolveraat’s wicket in both the first and second innings. Sadly, despite having South Africa five down with only a 48-run lead, rain interrupted play.

Five days would have seen a result.

The multi-format series against South Africa will continue and both teams take two points apiece. The big question remains though, when will the ICC take women’s Test cricket seriously?