Home Sport Jones: We should have put the game away | Should Arundell start? 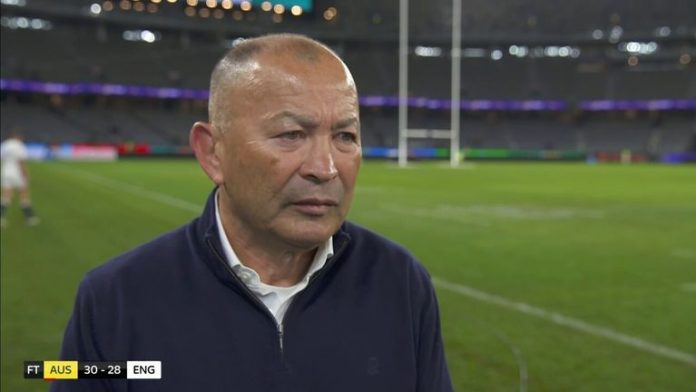 “We had enough moments in the game to win it but at 14-9 with 20 minutes to go we should have put that game away and we didn’t do that so we are very disappointed in that. But the commitment from the players is that we now need to win the series 2-1” – Eddie Jones

Eddie Jones bemoaned the fact England did not put away 14-man Australia when they had the chance during their 30-28 defeat in Perth, while also touching on the talent of Henry Arundell.

Australia saw second-row Darcy Swain shown a red card in the 34th minute for headbutting Jonny Hill, and England were leading 14-9 with 20 minutes to go thanks to an Ellis Genge try and Owen Farrell penalty.

The tourists, however, despite having much of the momentum until the final quarter, were left stunned as Australia struck three times in the final 17 minutes through Jordan Petaia, Folau Fainga’a and Pete Samu to put the result beyond England.

Jones, under pressure heading down to Australia after a second successive poor Six Nations campaign, cut a disappointed figure after a first England loss to the Wallabies since 2015.

“Well we had enough moments in the game to win it but, at 14-9 with 20 minutes to go, we should have put that game away and we didn’t do that so we are very disappointed in that,” he told Sky Sports at full-time.

“But the commitment from the players is that we now need to win the series 2-1.

“So we will learn from the game and make sure we don’t let them off the hook next time.

“Look, I don’t comment on the referee, he called it [Swain’s red card] that way and that is the way it is.

“Sometimes a red card can work against you because the referee can start to referee differently and we probably didn’t adjust well to that.

“The message at half-time was to put more pressure on them and we did that in spurts but two or three times we were on their line and we didn’t finish it off but Australia, on the contrary, whenever they got in our 22 they finished their movement off.

“We have just got to tidy up our ability to finish in attack and defensively we could have got after them a bit more we feel.

At 30-14 behind with a couple of minutes remaining, 19-year-old England debutant Arundell then emerged to score a sensational solo try with his first touch, before making another superb break prior to Jack van Poortlviet’s try in the final play.

“The other guy was JVP who came on at half-back in his first Test and equipped himself really well.

“So there are some positives to come out of a Test we are very disappointed in.”

“When he came in, he is barbed, he is a confident kind of guy and he occasionally puts noses out of joint which means that when it isn’t going as well, those whose noses were put out of joint are sort of waiting.

“It is a tough old press pack out there. The script around Eddie for a long time has been that the results just aren’t good enough so this just pours a little bit more fuel onto the fire.

“I think if England came away from this 2-1 there would be continued talk about it but Bill Sweeney would not blink.

“I think there is a problem on the back of the Six Nations if you come to Australia, and I am not sure where they are ranked in the world but they are definitely not top three and to lose 3-0, that becomes an issue.”

“I had three different England managers in my career- Jonno, Stuart Lancaster and Eddie.

“Eddie is the first one where we have had continuity.

“So a new manager comes in they bring their own backroom staff, their own philosophy, his own culture, his own speak, his own players, he starts capping new players.

“That could be a very different team under Steve Borthwick, it could be very Leicester heavy. Let’s just calm down.

“Eddie has been seven years in the job and he will ultimately be judged on the World Cup.

“This is the brilliant thing about sport, we are all judging him on what he did today.

“If Andy Farrell loses five games in New Zealand does he need to go?”

Should Arundell start for England in the second Test vs Wallabies?

“The footwork, Arundell is so strong to just bounce off two Australian players.

“You hope they get a second chance in the second Test.

“We talk about do we rotate or do we stick? I would love to see them have a go.”

“But where (do you start him)? I think Freddie Steward was really assured at fullback.

“He (Arundell) had no right [to score]. It is not like he skinned people, he ran through two people then skinned someone.

“I think he has proved on the big stage he is capable and I suppose in a long tour like this three games there is opportunity.

“Somebody may get injured or Eddie might want to try him on the wing or play him at centre but who knows.”

“I think right now Eddie picks a side he would pick for a World Cup final next week at 1-0 down.

“You have got to get yourself back in the series, you can’t go 2-0 down there is chaos then.

“Next week, I love all these kids, he might say if it were a World Cup final I would pick Arundell but there is no rotation next week, there is no chance next week, it is find a team to win.”

Davina Perrin: The 15-year-old set to become youngest player in The Hundred