Home Sport Most expensive over in Test history – Broad smashed for 35! 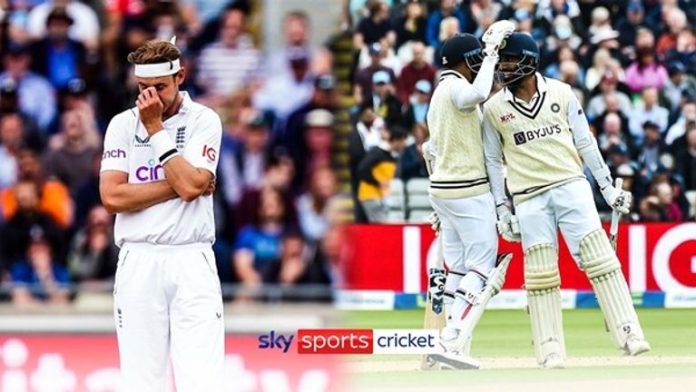 Stuart Broad delivered the most expensive over in Test history as stand-in India captain Jasprit Bumrah starred with bat and ball at Edgbaston.

Broad had just celebrated becoming the sixth bowler to take 550 wickets in the format when his fortunes faded dramatically, clubbed for a record 35 as he went into meltdown against the tailender.

Bumrah’s efforts helped the tourists to 416 all out before he got back to his day job, taking each of the wickets as England crumbled to 60-3 between rain breaks.

Broad’s six legal deliveries were pummelled for 23, including four fours and a six, with the 36-year-old seamer also serving up a wide that raced away for four and a no-ball that Bumrah top-edged for another six.

Things could have been even worse had another high full-toss been called, but umpire Aleem Dar spared Broad the additional pain. The previous record of 28 had been achieved on three occasions, with Broad’s team-mates James Anderson and Joe Root bowling two of the overs in question.

“It was just carnage when Jasprit Bumrah came in,” said Sky Sports‘ Michael Atherton. “That over off Broad – I’ve never seen anything like it really!”

Broad did not get a chance to make amends with the ball, catching last man Mohammed Siraj off Anderson’s next over to end the India innings.

The tourists had resumed on 338-7, piling on 78 runs in just 11.5 overs as England made a mess of their bowling plans in the morning session.

Broad had got England going when Mohammed Shami upper-cut him straight to the waiting Jack Leach, celebrating a landmark achievement that was about to be overshadowed.