Home Sport Sainz: Pole lap ‘nothing special’ but I can win British GP 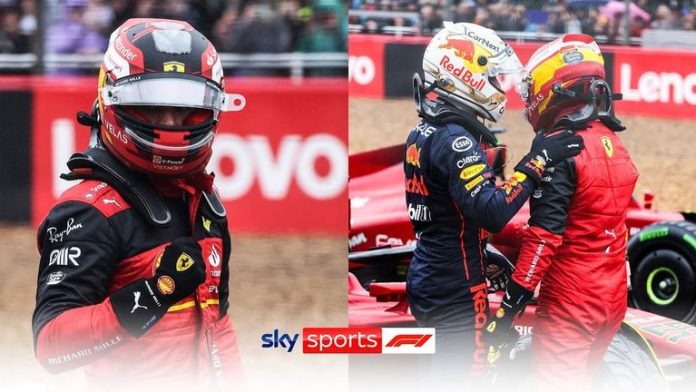 Carlos Sainz secured the first pole of his F1 career in a thrilling wet qualifying session at Silverstone; the Spaniard will seek his first F1 victory in Sunday’s race watch live race coverage from 1.30pm on Sunday with lights out at 3pm

Carlos Sainz has revealed he initially thought the lap that secured his maiden F1 pole was “nothing special”, but is confident his Ferrari has the pace to win Sunday’s British GP.

The Spaniard, driving in the 150th GP of his career, triumphed in a thrilling wet qualifying session as he edged out world championship leader Max Verstappen to seal top spot, with his Ferrari team-mate Charles Leclerc in third.

After struggling in Saturday’s final practice session and scraping his way through Q2 with a last-gasp effort as the track got wetter, Sainz found his form at the perfect moment in the closing stages of Q3.

“In the end I put together a lap that I thought was nothing special, but I just put it on the board and see how it is, and it was pole position, which came as a bit of a surprise.”

The wet conditions meant most of the drivers in the top-10 shootout spent the entirety of Q3 on track, leaving drivers unable to go through their usual battery-charging procedures before a flying lap.

Sainz explained that as a result of performing consecutive flying laps, he was low on battery power, which led him to believe his chances of pole had gone as he approached the final corner.

Speaking to Sky Sports F1’s Karun Chandhok at the SkyPad after the race, Sainz revealed he had a flashback to last month’s Canadian GP, where he believed an overly-aggressive approach to the final corner cost him a place on the front row.

“I’m super frustrated because I’ve just seen on the delta that I’ve lost nearly three or four tenths on that straight, and I’m like, ‘what do I do now? Do I send it or not?’.

“And then I remembered Canada and thought, ‘don’t send it, just close the lap and see where we are’.”

Sainz was rewarded for his maturity, and now has his sights set on adding a first F1 race victory to his maiden pole position.

He confirmed a disappointing performance in P3 was caused by an issue which he believes Ferrari have now resolved.

“We should be in a good position to try to hold onto it. I’m sure Max and Charles will put a lot of pressure, but I will try my best of course.”

Despite his qualifying mishap in Montreal, Sainz came extremely close to claiming his first F1 win at the Canadian GP, only being denied by a spectacular late defensive showing from Verstappen.

It was a hugely-encouraging performance from Sainz, who has largely failed to match the pace of his team-mate Leclerc this season and is 24 points behind the Monegasque in the world championship standings.

Ferrari team principal Mattia Binotto believed Sainz’s experience in Montreal – both in qualifying and the race – were crucial to his success on this occasion.

“He had a good weekend in Canada but the qualy was not so great there. I think getting the confidence you stay more calm, and that the fact that today he stayed calm in difficult and tricky conditions.

“I think Canada has been important for him, both the qualy and the race. The race to give him the confidence that he’s fast, and the qualy to try to reflect what was wrong, why he made a mistake, why he couldn’t somehow get the pole that maybe he had the potential for.

“I think again here staying calm and not over-reacting, I think that’s what he did today in very similar conditions. I think he learned from qualy in Canada, and he addressed it and showed that he’s a good learner and that he’s improving.”