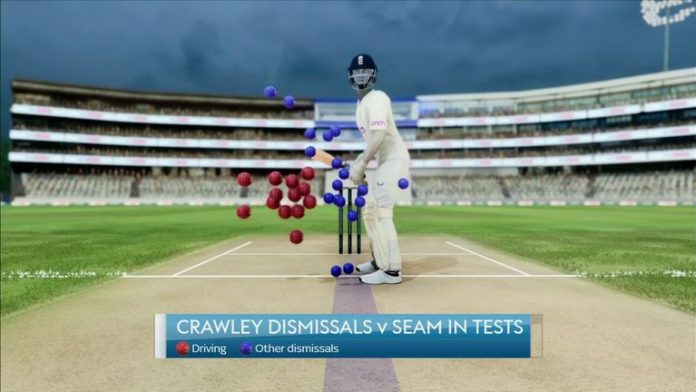 “When as an opening batter in England does attacking become reckless and loose?”; Nasser Hussain and Michael Atherton assess Zak Crawley, how long England can stick with him and what he needs to change after the opener’s Test struggles continued against India at Edgbaston

The 24-year-old Kent right-hander has received the public backing of head coach Brendon McCullum and captain Ben Stokes but, after his latest failure with the bat, Sky Sports pundits and former England captains Nasser Hussain and Michael Atherton discussed how long they can persevere with him and what needs to change for him to succeed.

Given the attacking brand of cricket favoured by the new regime, Crawley’s bold approach would seem ideal and Hussain believes that is part of what will make dealing with the opener’s slump a challenge.

“It is a real test for this new era, and McCullum and Stokes, because they’ve given Crawley their backing and this is how they want to play their cricket,” he said.

“They want to be attacking. But when as an opening batter in England does attacking become reckless and loose?

“To me, he is a rare talent and I don’t think there are too many people in world cricket that can play like he does. When I first came in and saw him play in the nets, and watched some of his old innings’ it pretty quickly stood out that he has got something that other players don’t have.

“My message to him was ‘there are 10,000 players out there that can play the other way, there’s only a handful that can play like you do; go out there and be the best version of yourself’.

“I’ll continue to try to encourage him to do that. We’ve just got to make sure that he’s courageous enough to keep stepping up even if things haven’t necessarily gone that well. I’ve got confidence in him for sure.”

“We heard Ravi Shastri talking about how Rohit Sharma and KL Rahul spent hours and hours in Durham last summer, in the nets against the Dukes ball, leaving the ball outside off stump. In England, the leave becomes a really important stroke – but does it under McCullum and Stokes?

“It is the repetitive nature of dismissals that must surely, eventually, become a concern. Driving without due care and attention against the moving ball is going to get you in trouble.

“You might get the odd pretty, crisp four through the offside but eventually a bowler of (Jasprit) Bumrah or (Tim) Southee’s ability will back themselves to find the edge.

“He’s got the backing of the coach and the captain but, if he keeps getting out the same way, when do you have to say something to your opening batter?”

Atherton argued that while there may be slight tweaks in technique that could help Crawley, more important to his future success was learning “the art of batting”.

“The words of the captain and coach are quite interesting,” he added. “I was in that press conference when Stokes was asked about Zak Crawley. So, what does he say? He can’t exactly say, ‘well, he’s in the last-chance saloon and if he doesn’t get any runs then we’re going to drop him’.

“The question really is: how much is it messaging for public consumption? ‘We’re going to back our players’, which of course the captain and coach have to do, but the question is how long do you back them for? Eventually, for everybody, the currency is runs.

“With Zak Crawley, I don’t think it is a technical thing. You can talk about technical aspects of the game but it’s about the art of batting, I would say, with Crawley. It’s almost as though he’s learning the art of batting at the highest level, under scrutiny and he’s got to learn more quickly.”

“Before we’d even played a Test match, the squad was picked on the basis that every player in every position is the best player in England to carry us forward in the way that we want to. This team and this squad is going to be given a lot of time to perform. Zak Crawley is still in my plans and Brendon McCullum’s plans going forward, to make this Test team great again.”

Asked what he would say to Crawley if the England man reached out for advice, Atherton said: “I wouldn’t talk technique.

“I would talk about what Graham Gooch used to call the art of run-getting, the ability to work out what a bowler is trying to do and work out the conditions in front of you – and the ability to adapt to both those things.

“If you think of his magnificent double hundred [against Pakistan in 2020] – which I am not taking anything away from at all – it was made on a beautiful batting pitch and there was not much lateral movement.

“He played brilliantly and I don’t think you can play like that and not be a player but you are not always going to have that and you have to find a way of getting through. That is what he is not doing.”

Hussain also argued that as much as Stokes, McCullum and others within the England set-up can offer guidance, how Crawley chooses to bat is, ultimately, up to the player himself.

“What really matters is what he thinks and whether he thinks he should change,” he said.

“If you’re sitting there as Zak Crawley, are you comfortable being this player, this inconsistent talent or do you want to improve, get better and become more consistent and not play the shot of the day but the innings of the day like Alastair Cook or Michael Atherton used to play?

“At the end of the day, it is your career and you’re in charge of it. You don’t get any runs if you don’t play some shots but with some of these shots the percentages are against him given he’s opening the batting in England.

“Jonny Bairstow is the way [England] want to play. He has been positive in his last three innings but not reckless, although there is a difference between opening and batting in the middle order in England.

“You would hope there is a little more in this coaching regime, where they say, ‘the percentages were against you today’.”