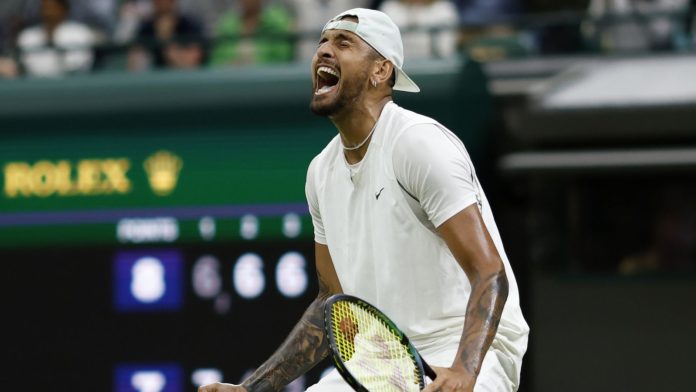 Australian maverick Nick Kyrgios knocked out fourth seed Stefanos Tsitsipas in a wild and wonderful Wimbledon third-round slugfest that threatened to spiral out of control on Saturday; Rafael Nadal advanced to the fourth round with a rather more straight-forward win

Nick Kyrgios knocked out fourth seed Stefanos Tsitsipas in a dramatic and controversial showdown on a raucous No 1 Court on Saturday night.

The maverick Australian recovered from losing a first set tie-break to win 6-7 (2-7) 6-4 6-3 7-6 (9-7) to win a match featuring code violations, a point penalty and numerous rows with officials.

At one point Kyrgios even demanded his opponent be defaulted for smashing a ball into the crowd in a bad-tempered affair.

The two-time Wimbledon champion had dropped sets in each of his first two victories at the All England Club this year but had no such problems against the 27th seed on Centre Court.

Nadal was breezing into the fourth round until Sonego successfully managed to get the roof closed while he trailed 4-2 in the third set.

The Italian then broke the 22-time major winner to love under the lights, but an irate Nadal hit straight back before serving the match out to keep his calendar year Grand Slam bid on track.

Cristian Garin reached the fourth round for the second straight year with a 6-2 6-3 1-6 6-4 victory over 29th-seeded Jenson Brooksby.

The 26-year-old Garin, who is ranked 43rd, said he appreciated the chanting from his compatriots in the stands on No 3 Court: “When I hear that, I know that the Chileans are (here) somewhere, so that’s good.”